I find it difficult to navigate folders and collections in the LH panel. To some extent this is because I (unwisely) chose to use similar naming conventions.If it were possible to allow users to "Colour code" folders and collections it would make navigation much easier and also give me another way of "cataloging" photos.My suggestion would be a small colour indicator, rather like the online/offline indicator but round instead of oblong.

I need this in my workflow today

And as you can see Adobe doesn't give a damn about customers wishes. 4 years are gone and nothing has been done. It's ridiculous.
I use Lightroom only since a few month. But I stumbled across so many flaws that I wonder that professionals are still using it. Ok, I admit, the develop mode is good. You can get really good results from the even worst image. But the rest around is just not good enough for a software that's in development since 15 years or so. We are talking about version 6 here. So I would expect a certain degree of features. And since a lot of professionals out there are using it, Adobe should have enough feedback what they actually want and need, and implement it as soon as possible.

just a small list of the top of my head:
-the mentioned color coding of folders isn't possible
-smart collections/filters aren't smart enough (I paid for the "Any Filter" plugin; i.e.: find RAWs without development settings, not in a bracket stack, quick develop setting - lens correction might be set)
-lens correction isn't applied automatically
-if you paste develop settings too early, while the image is still loading, they aren't applied; if you do it for a bunch of selected images it's done for the others but not the one loading
-you can't export/import names/metadata etc. into text/CSV files; you have to pay for extra plugins
-panorama assembly is crap; you can't tweak anything; I'm using Hugin for that
-HDR assembly is crap/slow/extremely memory wasting; a bracket set with 7x20MP images (1 = ca. 100 MB Tiff) is cramming my 8 GB so it sometimes start to swap data to the hard drive; if I use anything but the simplest de-ghost option I end up with lots of highly visible colour noise; usually the result is pretty much the same as middle one from the set - useless, I look into Photomatix, uses about 2 GB
-image export into different file formats/sizes/qualities in one step isn't possible; you have to do it one after the other, sooooo time/CPU/energy wasting; my solution is export as Tiff and then run XnView batch converter (even Canon's freeware RAW convert can export JPG/Tiff in one step, without red-rendering the RAW)

I probably forgot some things, I'm gonna have to start a list for it.

Ronny, all good feedback. But in general, splitting it up into one idea per thread is more likely to have influence on Adobe -- they're more likely to read the individual ideas, and others are more likely to be able to add their thoughts and votes. Most of your feedback is covered by existing topics. (The search function in this forum is not great, so if you can't find the existing topics, a moderator can often merge your post into the right topic later.)

I was just trying to make a point. You say it yourself those topics are already addressed in other forums. And, did Adobe take care of it? Nope, they don't. And even after years of development third party plugins from hobby programmers address the needs of the crowd better than what Adobe with hundreds of fulltime employes is able to deliver.

I fully agree that the much, if not most, of the individual feedback in these forums doesn't appear to have much impact. But overall, this forum does influence Adobe's product development, at least to a modest degree. The more votes a topic gets, the more likely (at least a little) that it will influence Adobe. But like voting in government elections, it's hard to see how the vote of one person can have much impact. With this forum, however, it's not just the vote, but more importantly, the expressed reasons behind the vote that seem to have more influence.

(And as a side effect, developers like myself get ideas for plugins by reading the feedback here.)

I feel like this will never be implemented... It would be amazing if Adobe added little features like this that are actually helpful.

This reply was created from a merged topic originally titled Assigning a color to a folder or keyword in Lightroom..

+1 from me ^^
I was thinking about this since I started using LR3 and sadly, it's still not implemented.

Would be awesome if there would be both Color Labels and Ratings !

This reply was created from a merged topic originally titled Making it Easy to Locate Special Folders and Collections in the Library Module..

I'd really like to see colored highlights on the folders in the Folders and Collections sections in Lightroom in the Library Module similar to the way in which I can add color ratings to thumbnails. This way I can immediately locate particular folders such as my Portfolio, Family etc. As it now stands the best I can do is to put these in all capital letters to draw my attention so I can locate them quickly. Please consider this for a future update.

This reply was created from a merged topic originally titled Lightroom folders & collections to have a color label. Like photos, to indicate w....

Color labels are great for photos and used for a variety of indicators, such as "Green" meaning all edited, tagged and ready for export. Or "Yellow" needing tagging.

It would be awesome if the list of folders and collections in the Library had a the same label option for each folder.

Then you could flag a whole folder as Yellow and know it needed tagging. Or Green and it's all done with no further work needed.

JFriedl made a plugin called Folder Status which allows setting statuses on folders, however you have to open the plugin to see what the status is for a folder, which makes it hard to see at a glance where that set of folders is up to.

The whole folder row could be highlighted by the user right-clicking and selecting a Label, or another way would be to have an indicate it would be for the folder to have icons for the labels of the pictures *within* the folder.
I've mocked up both styles as images attached. 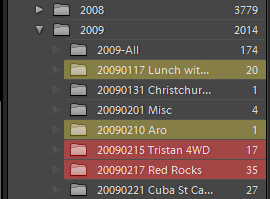 Come on Adobe!! It's been over 5 years since this suggestion has been made. It really doesn't seem that hard to implement this in some way shape or form. The inability to do this really makes my workflow klunky and inefficient. A simple color to the folder really doesn't seem that hard to add. As an ultra basic implementation just piggyback it off of the OS folder color (I assume you can do that in Windows as well??) and you're done. Can y'all at least even say if you're considering or working on this please?

It seems as though Adobe doesn't care about user input and small parts of a workflow. I think they are only interested in adding bigger features that are selling points...

I too have been requesting this type of color coding for both Folders and Collections for quite a while. How long must it take for a simple update like this?

I dunno guys, this one seems like a no-brainer to implement. Perhaps it hasn't been seen by a decision maker at Adobe?

Those who suggest it's a no brainer to code; you guys have coding experience with the LR product line?

I understand the want bumps for a feature, really I do. I've got a long list too. It's out of our hands. Make the request and move on (to using LR or another product). It's not like this 'idea' is so new and clever, no one inside the LR team thought of it too. They clearly don't have it high up on their list of 'features' to support. Maybe LR7?

I think after waiting 5 years already, people are allowed a moan ... it'd be a low-risk modification to LR with high-visibility results. Maybe LR 11?

Sorry Andrew not a good answer, if coding was easy we'd all do it. But one day they may allow colors as anew feature...

It's NOT easy, that's exactly my point Mike! No inexpensive either...

Workflow and functionality are what the app is all about. Compared to develop module code this would be a lot easier to implement. But as you say, all about priorities I guess.

That's what I thought the original purpose was. I guess priorities are just big features like mobile or haze. You'd think a smaller feature that actually enhances organizing would get included.

Develop and the features there are  primarily the domain if you will, of Thomas Knoll and Eric Chan, coming FROM Adobe Camera Raw (ACR). That's one reason why IMHO, the real powerful functions that keep coming are found in Develop. The rest of the app hasn't received the same degree of love from the LR team. IOW, if you have a feature request for ACR/Develop in LR, that's going to 'influence' two people; everything else, a team that has their own development priorities and speed to implement (or lack thereof).

Color coding selects and rejects, finished ør in precess is not a new thing..I just thought I was missing something for all these years.
̄\_(ツ)_/ ̄

This reply was created from a merged topic originally titled Lightroom: Color Label or Tag for folders in Library Module.

In the Lightroom Library Module's left column where the folders are listed it would be good to be able to assign a color label/tag to the folder itself to easily identify folders of a similar type.

In OS X you can assign tags to folders. If LR simply allowed these to be surfaced/visible that would probably go most of the way to making all the OS X users happy. This would be outside the Catalog though so has the downside of not being portable. And Windows users would need a LR specific solution.

This reply was created from a merged topic originally titled I would like to be able to color code folders in the library view of LR..

I would like to be able to color code folders in the library view of LR. Here's an example of how that could be useful. If I go on assignment and shoot for three days, and have the images separated by dated folder, I want to be able to indicate when I have finished editing a folder and when I have started editing but not finished. I also want to see which folders have not been edited yet. That way, when editing a large job with several folders, I will quickly know where I am in the editing process by, for example, seeing that one folder is red (already edited), while another folder is green (partially edited) and another folder hasn't been edited yet (no color). That is just one example as to how color-coded folders in LR general view could be helpful, because without being able to do that, the process of figuring out which folders have been edited, and whether they have been fully edited, is too cumbersome. I see that a few other folks have requested this feature, but to date Adobe has not provided it. FYI: I'm on a Mac. Thanks!