On my Windows 10 machine in the Library Loupe view, zooming to 100% (after 1:1 previews have been built) on a merged panorama DNG is slow to respond.

This is in stark contrast to the Develop module, where zooming to 100% is almost instant for the same photo.

Here is an example screen shot in the Library Loupe view: 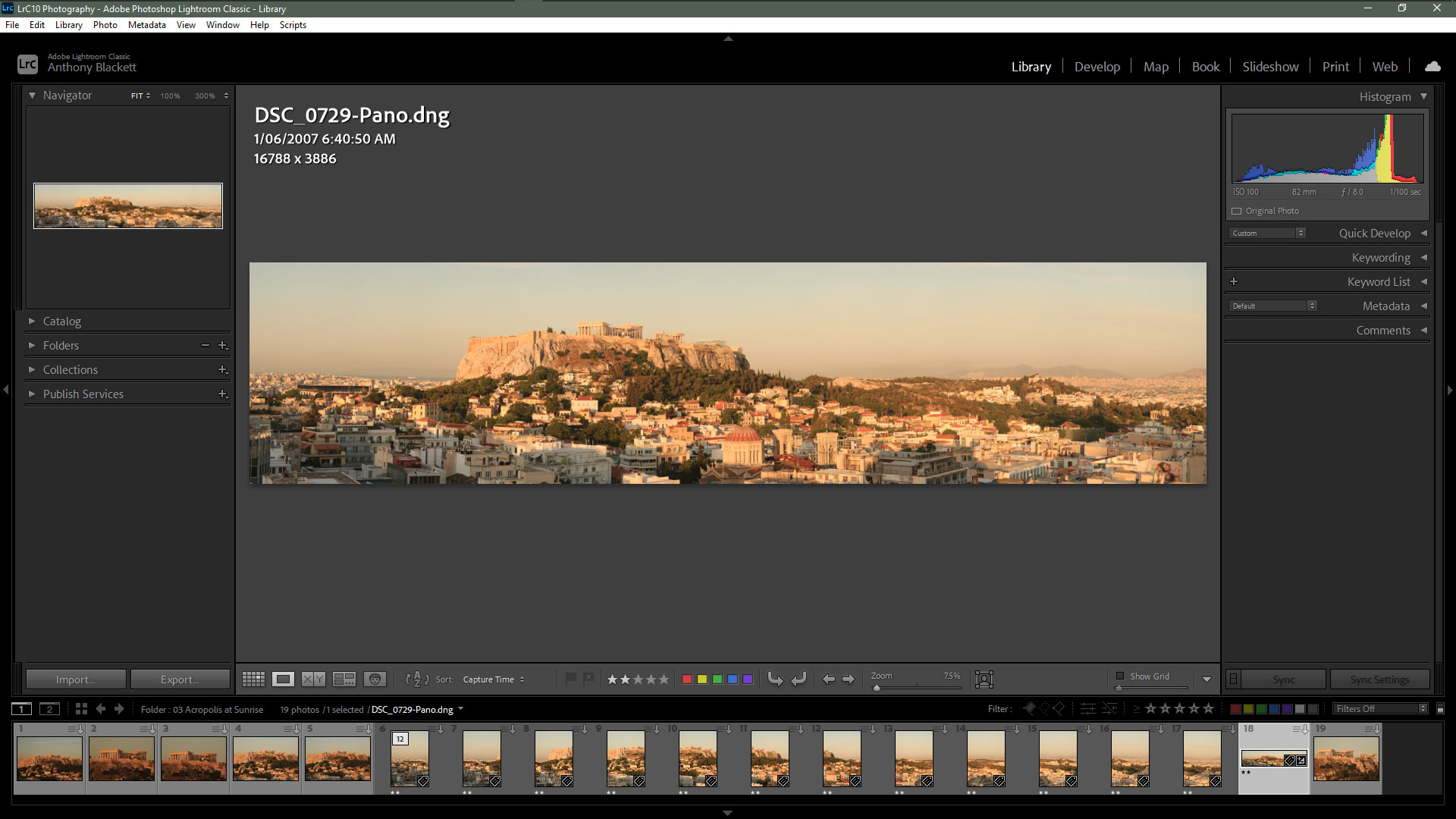 Here is the result of zooming to 100% 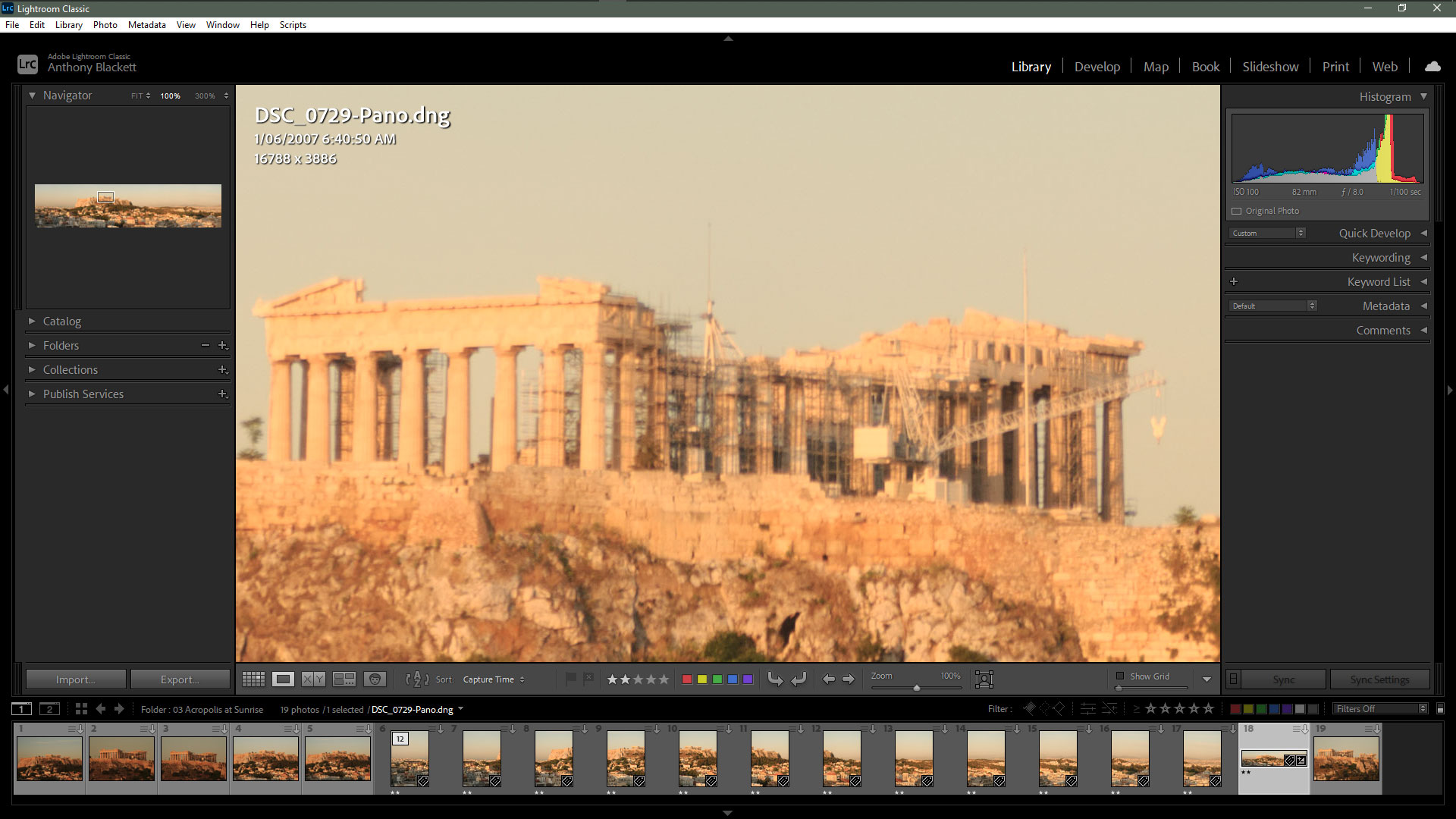 Observing carefully, I find that after clicking on the Acropolis to zoom in to 100%, the image first goes slightly pixelated, as shown in the screen shot below. Comparing this screen shot with the first shows a slight difference in rendering (it may not be easy to see in these uploaded screen shots). 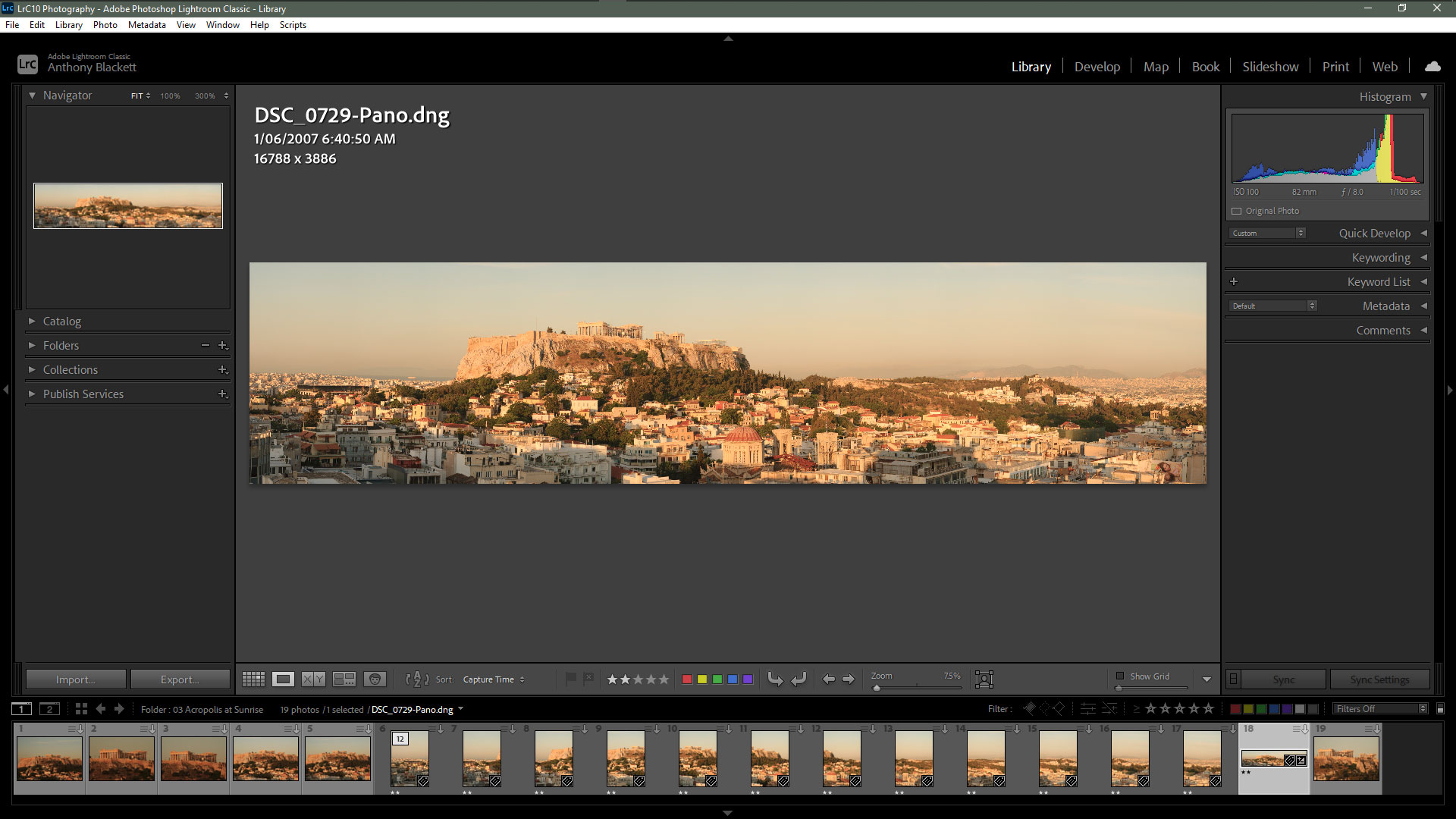 Then the Navigator zoom area pulls in from the sides, as shown below: 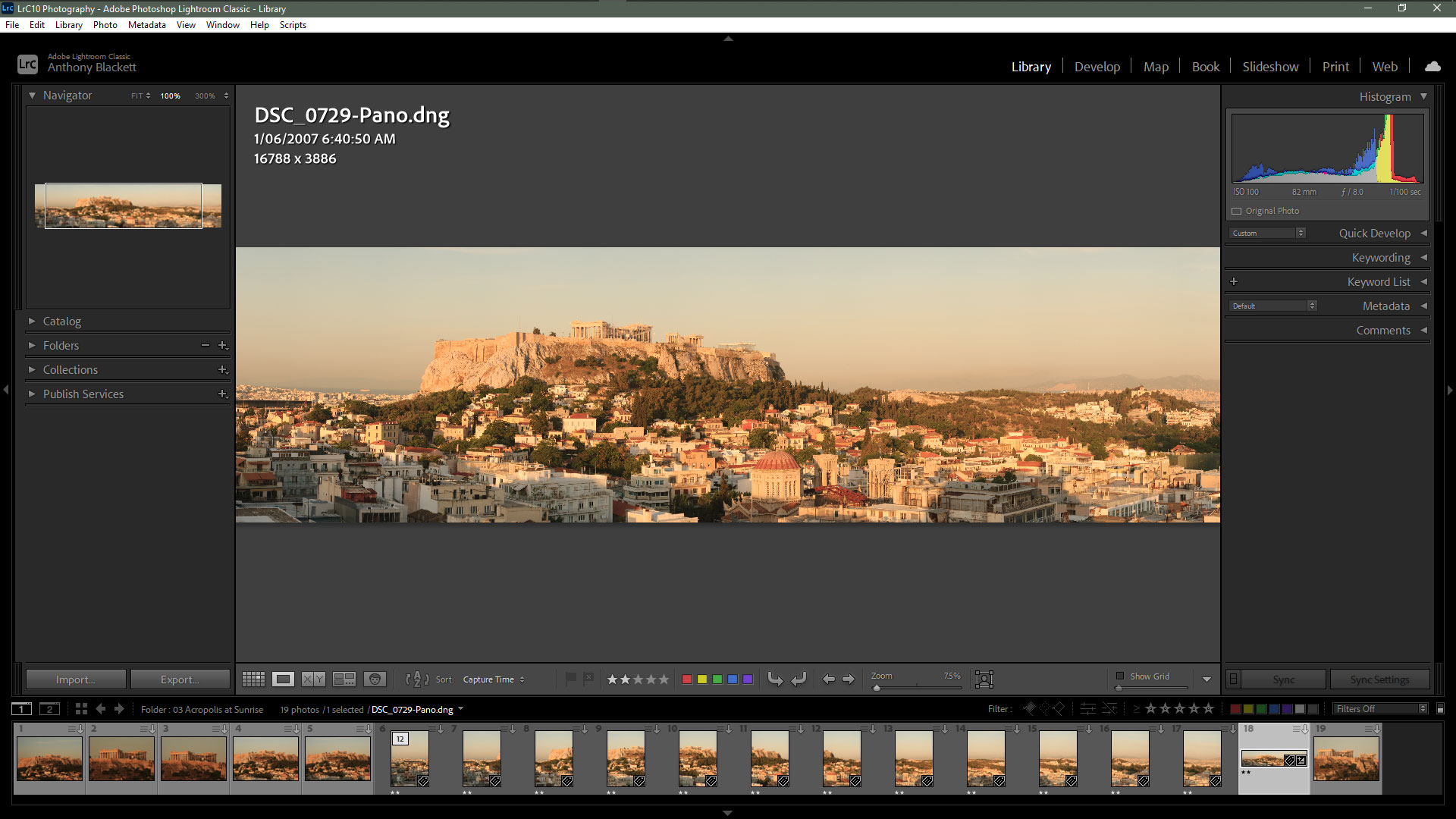 Finally, the image zooms to the 100% view that is shown above in my second screen shot.

The delay in zooming is sufficient for me to move the cursor off the image before it zooms in. For example, I have clicked on the Acropolis as I did before, then moved the cursor up to the top of the screen before the view zoomed in. This results in the image being zoomed to a point at the bottom of the image, as shown in the screen shot below: 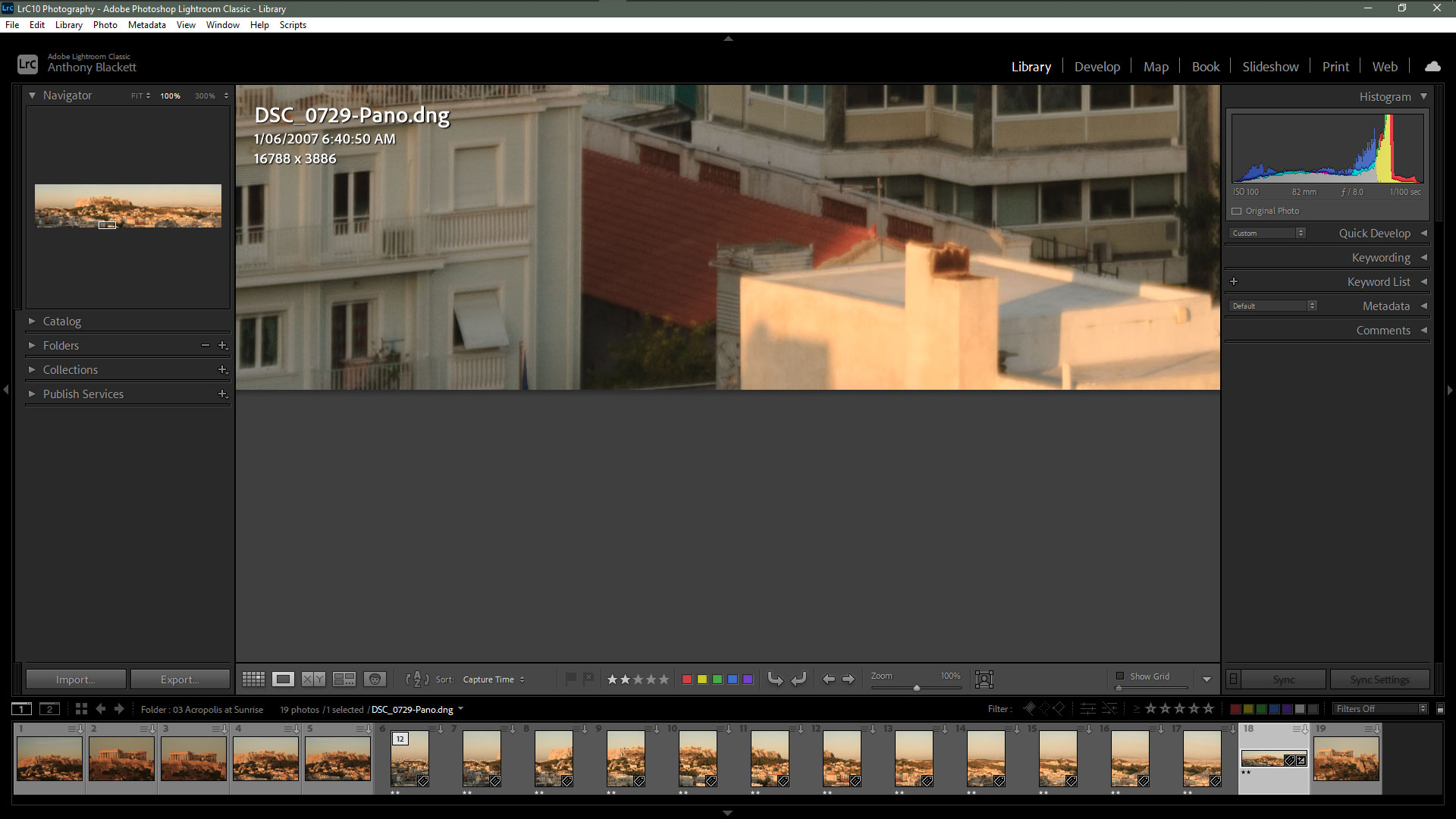 After clicking the image to zoom in, wherever I move the cursor before the zoom completes, the zoomed part of the image is always opposite to where I moved the cursor!

This seems very odd to me since a 'click event' has the screen coordinates of the point clicked, yet LrC is zooming to a point opposite to the position of the cursor some time after the click, but before completing the zoom operation.

For normal sized photos, the zoom to 100% in Library Loupe view seems to be fast, just as it is in the Develop module.

Is anyone else seeing this odd behaviour? Is it just peculiar to DNG? Turning off GPU doesn't change anything either. It has certainly has something to do with the image width/height. The wider the image, the slower the zoom. I find that a 10,000 pixels wide image responds quickly, the 16,788 pixels wide example here is slow, but a 45,000 pixels wide image is very slow. In Develop, zoom is always fast.

In dev the zoom is immediate

In Library if there is no 1:1 the first zoom is long. After the 1:1 has been created the zoom takes 2,5 seconds

Panning is slower in Library Loupe view compared to Develop, even on a single RAW but is really bad on a big pano.