Lightroom Classic/Camera Raw: "Edit with..." -"Open"does not work for photos from NAS

I had the same issue (if I tried to open one file in PS - not if I tired to open 2 at a time) but with the install of PS 20.0.2 the problem seems to have resolved itself. I am running the latest LR versionOn Win 10

Mark,It is working fine for me with Lightroom 8.1 and Photoshop . 20.0.2. In the past reports of this behavior were cured by performing an uninstall/reinstall of Photoshop.
Adobe Photography Products

The other, more elegant, solution is to disable the Home Screen in Photoshop preferences. Then you have no longer to think about starting Photoshop on beforehand.

The 20.0.2 update for Photoshop should resolve this issue without the need for any workarounds.

The problem of having to start Photoshop first or disable the Home screen was a Windows problem. The OP is using a Macintosh so this seems to be something else. I'm using a Macintosh running MacOS X Mojave too, but I can't replicate the problem.

I have just discovered I have this problem after updating to 20.0.2.  I restored the previous version which didn't solve the problem so i re-updated to 20.0.2.  I've tried re-booting which didn't work either.  Help please.

I've sorted it now.  I couldn't open the files because I wasn't locating them properly.

Hi Penny - when you say you weren't locating them properly - I usually just open the photo in Lightroom (so it's been located) and then just Edit In PS, but it's not opening the file in PS.  What do you mean by not locating them properly?  In LR?  I also downgraded to 20.0.2 and it didn't make any difference.

I have since discovered it's a problem ONLY with three specific DNG files. Others are opening normally. While I can open those three directly in Photoshop, they continue refusing to open in Photoshop from Lightroom. I have run Disk Utility and Disk Warrior on that SSD and there appear to be no errors. Another 'puter mystery.

If you launch Photoshop and attempt to open one of those three DNGs (By-passing Lightroom) do they open?
Adobe Photography Products

Would you be willing to send in one of the errant DNG files for testing?
Adobe Photography Products

Sure, but the raw file is 47.3mb. You can download it here if you want .https://businessportraitsnyc.com/client-files/1949.DNG

The file appears to be fine.  And since Photoshop will open the DNG ok bypassing Lightroom, we probably need to look at Lightroom Classic closer. Any edits performed on these files? Custom profiles?
Adobe Photography Products

They were imported and converted to DNG the same way I always do, using the same custom calibration I always use. No edits after importing.

Do you still have the original raw files that were converted?
Adobe Photography Products

Sorry, that I don't have.

I have had a couple issues with ANY type of file using "Edit In" not opening in Photoshop, even with Photoshop already open.  This is using Lr 8.1 Ps 20.0.2 and macOS 10.13.6.  A complete restart of everything got it working again.  Its only happened 2 or 3 times since the 20.0.2 update.  BTW, I do keep the Home Screen disabled in PS

Mac users: have you tried running Onyx to clean out caches and Application States? Run the free Onyx (https://www.titanium-software.fr/en/onyx.html), reboot. (In Onyx just run everything in the Automation tab). Run Disk Warrior if you can ($120),  (https://www.alsoft.com), reboot. If you can’t do Disk Warrior, at least run First Aid from Disk Utility. Also just doing a "Safe Boot" can clear out caches (restart, hold down shift until you see "Safe Boot" on the screen, then reboot normally.

Ok ... I just solved this problem by downgrading to Adobe Camera Raw 11.0.0.61
There's a bug in 11.2 that prevents raw files from being parsed/opened properly.

I haven't tried this yet, but I can't seem to downgrade as with the other apps.  It is set to auto update and doesn't give me the choice of downgrading.  How did you do this? 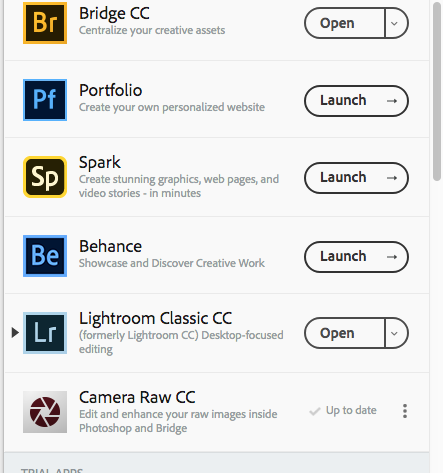 Hi I have exactly this problem. Were you able to downgrade and if so how?

I just ran the installer for 11.0.0.61 which hasn't changed the raw converter in LRoom but has reset it in Photoshop. This seems to have partially worked. What I am also seeing is that I can no longer open files directly from the NAS drive to photoshop under 12.2 but I can under 11.0.0.61 yet if i use raw files on a directly attached drive there is no problems at all.

I'm having exactly the same problem with all the latest versions. I can't open any files that are on my NAS but I can open files that are on a local hard drive. I have downgraded Camera Raw to 10.5 and I now can open photos in Photoshop. I have not as yet found a link to download Camera Raw 11.0 - I don't know why Adobe has to make it so hard to find download resources.

I just downgraded using this link, but I'm finding that Photoshop is crashing on me or not doing exactly what it should - possibly because it prefers a newer version with the newer version of Photoshop.  It's very frustrating!

C'mon, developers. I'm seeing additional reports of this problem in Adobe forums. I have a spanking new iMac running the latest Mojave and a subscription to CC, which is updated to the latest versions of all Adobe software, including Camera Raw. The Adobe updater informs me that all my software is up to date and that there are "no updates available".Two days ago, my workflow was impeded for the first time in ten years of working with Lightroom and Photoshop. I can't edit NEF/Raw files in PS for final tweaks, and then save back to Lightroom, from which I've always exported finished product. The deeply unsatisfactory workaround is exporting files from Lightroom as Tiffs or Jpgs, then opening them in PS and performing touchups, then importing them back into Lightroom. This easily DOUBLES the time I spend on each photo! Has anyone found an actual solution to this problem, or are we just offered the usual make-work, immense hassle, reinstall everything and lose your settings BS?Sorry to be so rude, but this is immensely frustrating when dealing with a huge and ongoing work load involving photo editing/output. And of course, it scarcely needs to be said, while paying hundreds per year in monthly fees. Jean

Hi Frank - yeah, just saw another thread yesterday in which the advice was given to downgrade cameraraw. I followed it and am now back to normal workflow - a huge relief.

I do find it interesting (and hugely frustrating) that these glitches - often the unintended result of software upgrades - are dealt with by companies in such a cavalier fashion. First, the desperate appeal to user forums, followed by days of useless suggestions (have you tried reinstalling all of your Adobe products? Perhaps you should clean out your caches and run disk warrior. Or stop using any NAS for storage. You wouldn't mind reinstalling your OS, would you?). Then finally, after hours of recriminations and counter-recriminations and false leads - some provided by Adobe support - it comes down to a glitch in an upgrade to cameraraw.

I know it's the sort of abuse we've been trained to expect as users, but that doesn't make it right. Again, sorry to bitch, but I pay a crap load of money for these programs and when you slow down my ability to make money off my work and put me in the position of trying - through trial and error - to solve a software problem caused by the manufacturer, it just feels wrong.

Again, it's that digital universe in which the customer is always wrong, but here's my cri de coeur in any case. We know we're on our own, that those of us who work for a living using software are guinea pigs, and that we must not only pay through the nose for the privilege but work unpaid hours for Adobe as part of the bargain. I get it. That doesn't make it any more acceptable. END OF RANT.