I've a newly installed desktop version of Lightroom 6 on Mac and the ends of the tone curve can't be moved up or down so that the rest of the curves remains straight. The whole linear becomes curved and the ends are not moving. I've ticked the little box in lower right corner in the Tone curve-section but nothing happens. Is this a bug or am I doing something wrong? 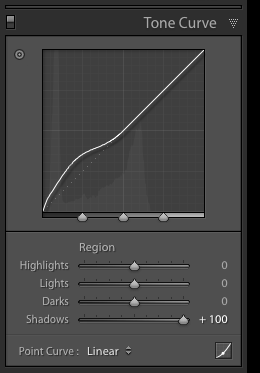 Hi Aiira,
Click that little curve button at the lower right of your screenshot and that should give you what you're looking for.

I've done this and it doesn't help. I mentioned it on my post. It just shuts the Turn curve section down. No changes in the ends of the curve. Unfortunately.

As Stephen says, if you want to modify the curve, you just have to create a button by clicking on the curve where you want to put this button

To get these button out you only have to get your cursor on that button, maintain the click and goes out of the curve frame than leave the button.

It should perform similar on both RAF and JPG files or does it? I've JPGs now.

It just keeps doing the same. i can't catch the last point of the straight curve with mouse and lift it up even when I've ticked the box in lower right corner. I tried to add points and got some movement in the end but the curve was not straight.

Is this a computer issue or something else? 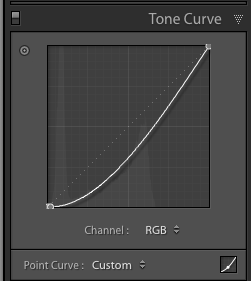 Hi Aiira,
The end points should be grabbable, so if you're having issues it could be a software issue, or it could just be your not clicking on the end of the curve and instead inserting a node just outside of the end. 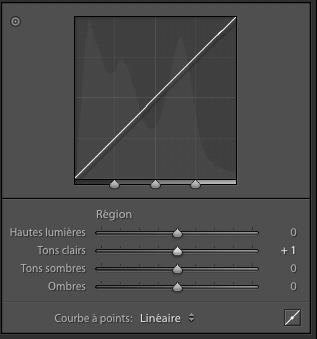 There you see different sliders you can manually move to change the tone curve.
Than, if you clic on the point curve zone, you get some preset that put you back to a specific curve.
You can also create preset there. 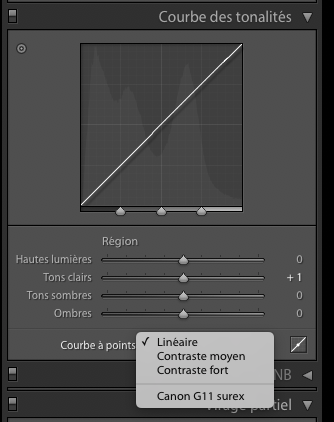 And, last but not least you can always create/modify tone curve by adding or killing points.

It's very difficult to be certain, but it looks as though you've added a point just to the right of the left end point (which is just about the only way you can create that curve in point curve mode). So the first thing to do is verify that the point curve is working correctly by trying to add a few points by clicking on the curve away from the end points. Assuming they get applied correctly, we can at least be sure the point curve is functioning correctly.

After that it should be a matter of technique to "grab the end points"....perhaps start from outside the grid and slowly move towards either of the end points. Eventually the cursor will change from the standard cursor to a solid horizontal line bisected by a vertical line with arrow heads at each end. That's the point at which you click and drag, and if you haven't moved off the point in the act of clicking, you should have captured the end point.

One curiosity....you mention that you're using Lightroom 6, what update number have you installed? The latest is 6.14, but in that version the icon which you click on to switch between parametric and point curves actually has a straight line, not a curved line. This is from 6.14: 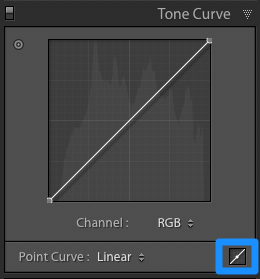 Notice the difference? That change happened between LR5 and LR6, but I can't remember if it was at the start of the LR6 cycle. In any event, you ought to check which version you're actually using (Help>Systems Info) and update to 6.14 if you've got an earlier version. It won't make any difference to the issue at hand though, it's just sound practice.

Thank you guys for your contribution!

Something is very strange here. I've previously in an other versions of LR been able to move a straight curve upward but not in this LR 6.0 so I know how it should work but in this one it doesn't do so. 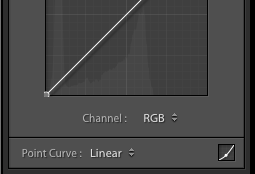 I'm able to add extra points to the curve and move them but I can't move the ends. I go so low down that the cursor becomes "solid horizontal line bisected by a vertical line with arrow heads at each end." and I still can't move the end points up or down. This worked in a previous version. 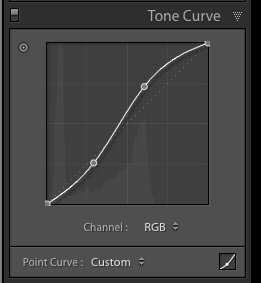 The only way when I'm able to move the end points is when I add points to the curve and then move the last part between the second last point and the last point. The problem is that I want to move a whole straight curve up and not only a part or it. 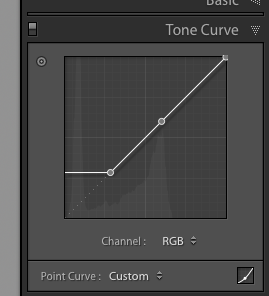 The closest I'm able to get is by adding an extra point to the top of the curve and then try to move the lowest end point upwards. Like this, but the curve is like spaghetti and feels of course unreliable. I also need to be careful to see that the curve is as straight as possible. 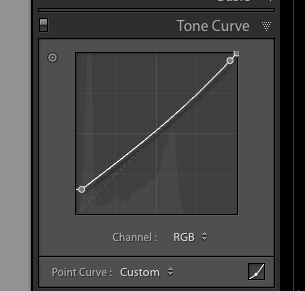 I was just wondering if this is a software issue or my computer because I do have other issues with this computer in other softwares too which I don't have if I'm using my laptop. But I can't use LR on my tiny laptop and would need to work on a bigger screen. To solve this type issue I might need to buy whole new computer and that's why I wanted to ask if this is a bug or my computer. As I mentioned earlier, I've other issues with this Mac too which I've tried to solve in several ways but still things doesn't work as they should.

What do you think?

The icon bottom right is just that, an icon....it's not interactive, so doesn't change from linear to curved depending on the type of curve being used. In LR5 that icon always showed a curve, in LR6.14 and LR Classic the icon shows a straight line. When did that change? I can't recall, but it doesn't really affect the issue at hand.

One thing, however....if you really are using 6.0 I would urge you to update to the (free) 6.14 version....there'll be a ton of bug fixes applied throughout the LR6 cycle so it should be to your advantage to make use of that update. Who knows, it may even fix your problem with the tone curve.

I just downloaded this version about 2 weeks ago and this's a stand alone version without Creative Cloud. I've understood that  I should have access to all updates of LR6 until they release 7.0 but I'm not sure. I couldn't find a way to update this 6.0 from my account so I don't know where to do it. They just push this CC account everywhere and I don't want that.

It's nice when things work 8-/

Thank you! After some chatting at Adobe I now have LR 6.14 and the tone curve works as it should. Now I can crab the ends and move them while the curve remains straight!  Yeaaahh!

So it was a software issue only thank goodness. 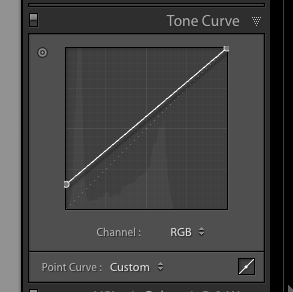 Thank you for everyone for the hint updating to 6.14. I thought I had the latest one because I bought this only about 2 weeks ago.

I can't believe this is the only record of this I can find online. I have the exact same issue, except in my previous computer version and mobile version I could move the ends of the curve, and then it changed suddenly for no knowable reason. I have just got a new computer and downloaded Lightroom and from the offset I can't move the ends. Very frustrating.

Make sure you try this with the point curve, not the parametric curve. Click the little icon at the bottom right to toggle between the two.

I am having the same problem.  I am using LrC, latest version, and cannot grab the end handles on the tone curve.  I am also missing the icon that changes point curve to linear.  Any ideas?

The 'Point Curve' is now (LrC v9.4) selected with the 'white' circle above the curve window.

The Black 255/255 or White 0/0 points are selected to move up/down when you see a double-ended vertical arrow appear. Cursor (arrow point) is critical to place exactly on the corner ends of the curve line.

The white circle didn't work, and I could never get the arrow to become a vertical.  After almost 2 hours with Adobe Tech support, they suggested I install a previous version of LR, because their most current version has bugs with the latest Mac OS.