Thanks, switching off the GPU solved the problem.

unfortunately this bug is still not fixed in the current LR CC classic 7.1 version.

It's really strange that the picture is displayed properly in devekop mode when switching to Y/Y options but in normal display mode we only get a black screen.

Please fix this bug to reenable the GPU enable option!

This reply was created from a merged topic originally titled Lightroom Classic CC: Photo is completely black in Develop screen with GPU accele....

Enabling GPU acceleration in Lightroom Classic CC causes the entire photo in be black in the develop module.

Closing and restarting Lightroom will fix the issue, but it returns if I go into the LIbrary module, and then select a different photo to develop.

Disabling GPU acceleration is the only way to definitively fix the issue. I am working with 46 MP files on a 2560 x 1440 monitor, disabling the GPU is unacceptably slow.

I reinstalled Lightroom CC (2015) and it does not have this issue, I can use GPU acceleration without a problem.

I bought a new video card (Radeon RX 580) and updated with the latest drivers in an attempt to fix this issue.

Interestingly enough, if I use the crop tool inside develop mode, the photo renders perfectly fine. 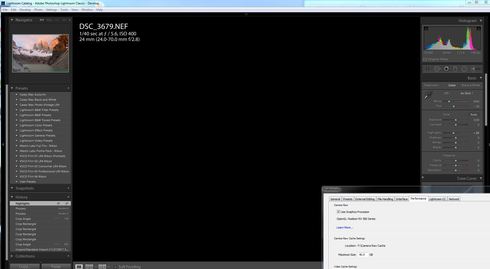 It's quite disappointing: This issue is still not entirely fixed in today's LR classic CC 7.2 release.
Seems that in development module it now wirks fine when you switch between images INSIDE a collection. (this also didn't work with LR 7.1)
But when you switch to another collection/folder the black screen phenomenon still appears! :(

Can anybody confirm that a clean uninstall and install of the video driver did resolve the exactly this issue (black screen in develp mode when GLU on only when switching to another library)?Don't know how often I tried new drivers and clean installs of my Radeon RX470 card => each of them withour success.
I'm somehow tired of replies like "The black screen issue is most likely due to some driver compatibility or bugs. Do a complete clean install the latest GPU driver."Using a 4k display the GPU support is highly necessary for speed reasons and the exact issue description and observations in this thread make it - in my eyes - evident that there is a bug in Lightroom which causes this behavior.

I meanwhilst had a very good support communication with AMD. Tried to uninstall the driver with DDU (Display Driver  Uninstaller) and tried to install several drivers and sent the log files to AMD.
They even read the forum discussions in the Adobe forums (this is good customer support, Adobe!).

Is there a config.lua flag to force LR to use DirectX instead of OpenGL even on Windows 7?

I FOUND THE REASON FOR THS ISSUE!
After trying another video adapter from another PC which worked fine ona  WIndows 10 PC while also having the same issue on my main LR WIndows 7 PC I finally found what causes the problem: 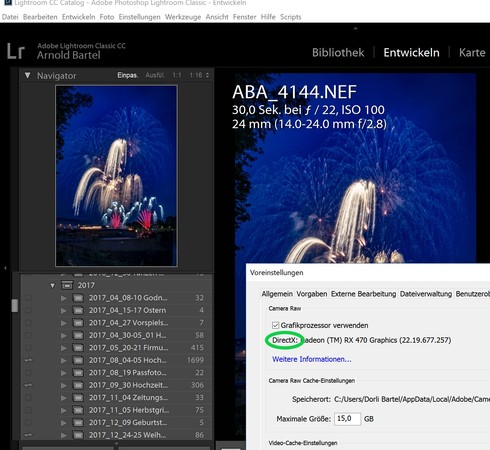 when I use OpenGL instead (e.g. by using the config.lua flag Develop.PreferOpenGL) the issue causes the black screen 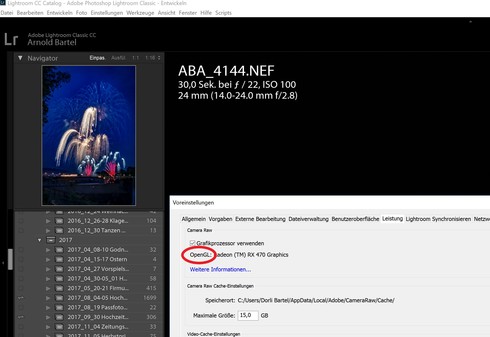 I would be very pleased if you Adobe guys could try to reproduce this issue with the new information (switch to OpenGL by using the config.lua flag and change folder in Develop mode) to locate the bug.

I had the same problem a couple of years ago.
Word usually gets out to the Graphic card manufacturers pretty fast.
Some of the manufacturers list the release date of the drivers and occasionally you will see a new update 2 days after the previous update (where someone goofed)

This setting really changes the GPU mode.
By setting it to opengl on my Windows 10 system it makes the error reoccur.

Follow https://helpx.adobe.com/lightroom/kb/lightroom-gpu-faq.html to try to update the GPU driver the latest version from the vendor. I recommend doing a clean driver install because we've found cases in the past that without the clean driver install, it does not always purge the old driver bits from the system. This is especially true for Windows.

I have already done the clean driver install several times.
The final solution for this issue was forcing Lightroom/Camera Raw to use DirectX instead of OpenGL (see the observations in this thread).
This switching to DirectX was - at least at my system - only possible by updating to Windows 10.

Simon:I would appreciate if you could try to reproduce this issue with by switching to OpenGL (using the config.lua flag or Camera Raw GPU Config) and change folder in Develop mode).
Is there anybody who can confirm that there are systems using GPU enabling and OpenGL mode where this issue doesn't occur?

Lr will go through the DirectX path on Windows by default. It would fallback to OpenGL if it detects runtime issues with it. After updating your Windows and the latest GPU driver, you could give DirectX another shot via the method documented above. Or I would simply delete the C:\Users\%Username%\AppData\Roaming\Adobe\CameraRaw\GPU\Camera Raw GPU Config.txt (Lr will recreate it).

Simon, I appreciate your efforts very much. I for myself have already solved the problem on my system by using DirectX.
I just wanted to know if the issue is located in LR / Adobe SW or if it's an issue in the video driver. So it would be interesting to get information if it also occurs on other systems when OpenGL is activated instead of DirectX.

We don't see widespread issues with this. We do test the OpenGL path internally. From what I saw on the reported occurrences on the forum, most if not all are machine/GPU card specific. That means the driver is most likely the culprit.

I see this issue also but only in LR and NOT camera raw. In LR I have to use directX but in photoshop/camera raw I can use OpenGL. I have an older GPU but it was previously approved and worked correctly in earlier v7 versions of LR. It has always worked in camera raw. So I think there is some difference between camera raw and LR in handling the GPU. I have the latest non-beta drivers.

After the latest LR Classic and PS update both are now back to using OpenGL instead of DirectX. Camera Raw works fine but now LR suffers from the black screen when I develop a second picture. No problem previously with DirectX. Was something changed in these latest updates?

I also have the black screen effect, but in CC, rather than Classic CC.

When swaping from grid to loupe view in CC ( where the library and develop modules are effective combined ) the image goes black under GPU accelleration.  When disabled, the image reappears.  I am sure that this is caused by OpenGL ( either ATI or Lightroom code ).

As there is a way to edit the Camera Raw GPU Config.txt to force Lightroom to use OpenGL, then there must be a way to force it to use DirectX?  I have tried a few different versions with varying capitalization, but nothing works so far.

Anyone have any ideas?

First follow the above FAQ and test out the latest GPU driver from AMD.

If you want to fall back to DirectX, just delete the C:\Users\%Username%\AppData\Roaming\Adobe\CameraRaw\GPU\Camera Raw GPU Config.txt file.

To force OpenGL, after the config file gets regenerated after a relaunch and quit of Lr, edit the text file in a text editor, look for the "directx" and replace it with "opengl".

Thank you for following up. I think your comment pertains to Photoshop and Camera Raw. I don’t have a problem with CR, only LR Classic CC. Furthermore I don’t care if it uses OpenGL or DirectX. I would just like the black screen in LR to go away while using whichever acceleration LR wants to use or I can force it to use. LR Classic CC has worked in the past with either (but not recently with OpenGL which is what it wants to use now). CR never had problem no matter which acceleration it wanted to use; it now wants to use OpenGL and it works.

Thanks for replying back.

I have just turned my PC on to find that there is a new update for CC.  Upon opening and browsing to the Preferences, the program is now using DirectX.  I did not delete the txt file like you suggested, so I imagine the new build must have changed the accelleration back to DirectX.

Thanks for your help!

I updated to LR8 but still wants to use OpenGL and still have black screen. But PS20 is using OpenGL fine.

I have also the same issues still with LR8, Windows 1809, Nvidia GTX 1070 Ti 8GB. Mostly, it happens when exporting pictures (between 100 - 200 in a row). Sometimes, it can be "fixed" by reloading the Win Graphicsdriver by CTRL+ALT+WIN+B key combination. But after I have to restart the pc that LR is working stable again for a time. For sure, latest Nvidia graphcis driver installed.

I tried the "workaround" with removing "OpenGL" from the "Camera RAW GPU Config" file, but this did not resolve it. As James sayed, LR is the only program where it happens, also no problem with PS and any other (graphcis) program