When I syncronize a folder, LR wants to remove AND import ALL photos and place them in a identical folder folder at the top of the hirachy and leave the “original” folder empty.

Can you show a screenshot of it? You may have a problem known as the 'Capitalization problem' or 'Case sensitive problem'.

Both my drives (Mac ́s) are case-case-insensetive

Please post that screenshot. The case-insensitive formatting (which is default for MacOS X) is exactly why this could happen. 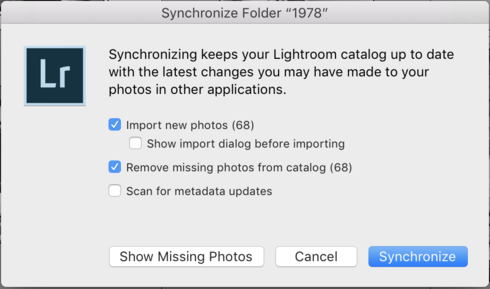 Thanks, but I mean a screenshot that shows that the images would be imported in an identical folder at the top of the hierarchy and leave the current folder empty.

I can not show intention, only result; if I proceed. And it will take some time, my system has crashed completely.

Make a catalog backup first, because this will almost certainly mean that you lose all the edits on those images.

Then make two screenshots. The first screenshot that shows the current folder panel, and a screenshot of that same panel after you proceeded.

If you are completely restoring your Mac and have reformatted the disk, you may find tomorrow that the problem is gone.

I had a similar behavior some time ago. In my case the sync of the parent folder was somehow corrupted. As a first step I did a fresh sync/import of my „root“ folder for Lightroom, which resulted in a duplicate folder hierarchy within the Lightroom. And as a second step I removed the „old“ folders from my Lightroom catalog. Since then everything works fine again.

That's not the preferred way to solve this problem, because that means you will lose all edits and metadata of those images. There are ways to solve this without losing anything, but let's first wait if the problem is still there. Because it is related to (hidden) folders on the disk, it may very well have solved itself because of the complete system restore.

I have not lost anything. All edits are still there, but I save them in XMP per default.

Good for you, but you would still have lost their entries in collections, lost them in publishing services, lost any virtual copies, and anything else that depends on their presence in the catalog. There are ways to avoid that completely.

I mean it: I have not lost anything. Not an edit, not an virtual copy, not an entry in a collection or anything else . But perhaps we have different procedures in mind.

It was a couple of month ago, so I might not remember it correctly: I did a right-click on my „root“ folder in Lightroom and synchronized it. That doubled my folders in Lightroom, because the old one did not any properly for a while. I removed those old folders from Lightroom via right-click without issues, collateral damages or so. Nothing was or is missing.

Perhaps you had another problem then. Anyway, let's wait till the OP reports back to see if he still needs a solution or not.

I did the sync om parent folder and lost all my adjustment history. I ́m now trying to Dropbox catalog and preview from the healthy two the sick. If that dos not work I am thinking about converting the sick to APFS as the healthy.

Is the 'sick' an external disk? If so, then your restore obviously did not affect it. Reformatting that disk probably will, regardless of whether you use APFS or HFS+.

Does that iMac have an SSD disk? If not, you can't reformat it to APFS.

So if I understand you correctly the restore did not solve the problem? In that case I would really like to see those before/after screenshots of the folder panel.

Fusion disk, not SSD. I understod that it was possible to use APFS. 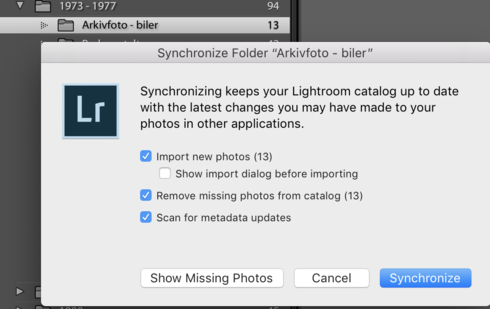 This does indeed look like the capitalization problem. Hover your cursor above the new folder, Lightroom should then show you the path. Look carefully. Do you see a folder in that path with the same name as your existing folders but in ALL CAPS?

Nope, they are the same.

Check again, it could also be just one capital letter that is different. The paths cannot be the same, because the folders are not the same.

You are right, the username is different. How did I change username ?

You didn't do this. It is a mysterious problem that pops up both on Macs as well as on Windows. Nobody has a definite explanation why this happens. To correct this, we need to establish how much of the folder hierarchy is affected, and which part should be corrected. Which username is shown in the Finder for your user folder? The name of the existing folder, or the name in the folder path of the new folder?

Dropbox is probably what (indirectly) caused this, because you synchronized these two different user folders. Let me explain the underlying problem:

MacOS X (and Windows) are case-insensitive, so a user folder called 'ole' and a user folder called 'Ole' are one and the same folder for MacOS X. If a Dropbox sync between two computers causes both folders to appear, then you won't see anything unusual. MacOS X will simply show you one folder, and anything that's in these two folders will be shown as being in that one folder.

It worked :-) Thanks for your help.

I am having the same exact issue right now. I am reading through the thread, was there anyone that knows why this happens? I currently tried to re-sync a folder and its asking the same. To remove all photos and re-sync them again and it will add them into a duplicate volume in Library mode. So weird, but I'm getting very frustrated with it.