Lately, I am getting different (poor) behavior when using the spot removal tool in heal mode on the edge of an un-cropped image.

For example: if I have a mostly black edge of an image (say, a groom's black tux jacket), with a little bit of white along one small portion of the edge (say, a crease in the jacket and I can see a little bit of white wall behind the jacket), if I spot-remove the white, formerly it would completely wipe the white out, leaving only black (or shades of black, if you will).  But lately it's acting as if I'm not surrounding the entire white area with my spot, and leaving some white blurry bleed in the healed area. Doesn't matter if I define a smaller heal area that's just beyond the white area, or a huge heal area that's far beyond it... circular or un-circular spots... and no matter where I move the sample area around.

I just started noticing it in the past day, but it may have been around longer.  It's happened on multiple images, in different situations, and I have been careful to make sure the image is not cropped or lens-corrected or transformed... so I'm definitely not picking up any area/white outside of the visible edge.  It never used to do this, so I believe it's likely a bug.

I have recently noticed a similar behaviour with a cropped image. I have tried to remove a small dark spot on a nearly white background near the edge of a crop. I was absolutely sure that the area outside the crop was of the same white color and texture as the background of the crop. No matter what I tried I always got a kind of dark shadow in the healed area. I was surprised about this since I have not noticed such a poor behaviour of the spot removal tool for quite a while.

I concur, having the same problem and thought it was just me. Playing with feathering sometimes helps a little but doesn't clear up the issue. For me, definitely new with 9.2.  Perhaps it is time to start a movement to get Adobe to revert Lightroom to 9.1 as 9.2 is a terribly buggy release?

You can revert to 9.1 if you want to, just click the arrow next to the Open button and select from Other Versions.

On Windows, the only Open button with an arrow is Open Recent and that only gives the option to open a recently used catalog.

I assume Victoria means the open button in the Creative Cloud App.

Any chance of some screenshots so we can see exactly what you mean?

I have attached two screenshots showing the effect for the edge of an UNcropped image.Spot removal tool was set to healing, feather = 0 and opacity = 100. These settings have led to the "best" results. Changing the size of the spot removal tool has no effect.(I use Lightroom with the German localization, so I hope I have guessed the proper English terms) 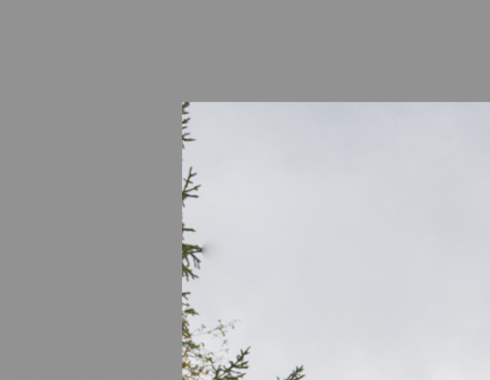 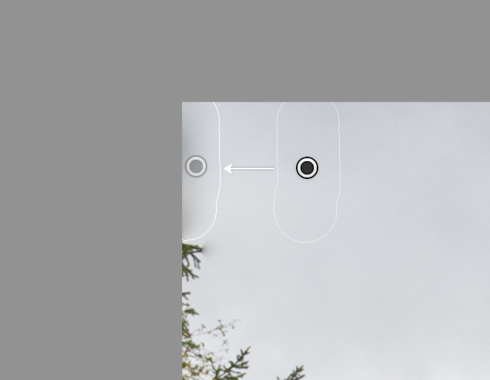 This is the expected(not desired) behaviour of using the heal tool in an area to the edge that's cropped(you'd get the same result if it's uncropped). What heal is doing is trying to blend tones and textures in the area. Although you can't see the leaves in the cropped area, it is there so LR tries to blend it. The only thing that won't do that is 'Clone' which is what you need to use in these instances.

you'd get the same result if it's uncropped

If the image is uncropped Heal should remove the tree branches.

tpnotes said, "have attached two screenshots showing the effect for the edge of an UNcropped image.
I suggest uploading the original image file to Dropbox or other file sharing site. 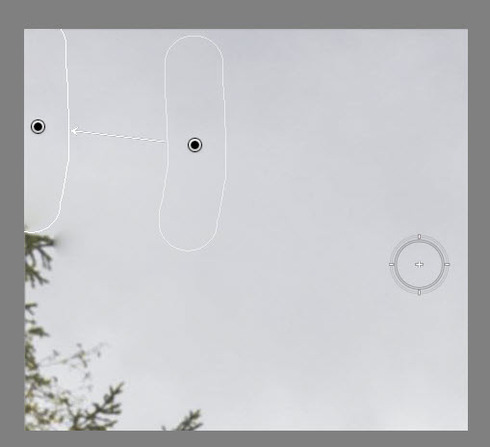 https://helpx.adobe.com/lightroom-classic/help/enhanced-spot-removal.html"Heal Matches the texture, lighting, and shading of the sampled area to the selected area."

I am no native speaker, but for me "match" and "blend" are describing different behaviours. 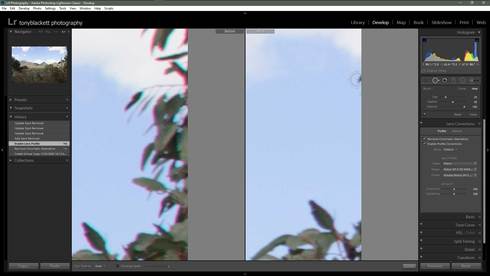 Clicking on the leaf with the spot removal tool in heal mode and moving the sample point results in a smudge. 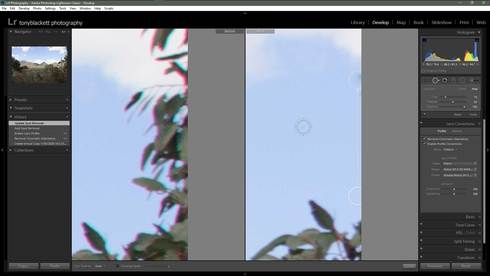 I think the smudge is due to Lr blending with part of the leaf that is 'outside' the lens corrected image, but 'inside' the original image boundary. Turning the lens profile correction off shows this more clearly. 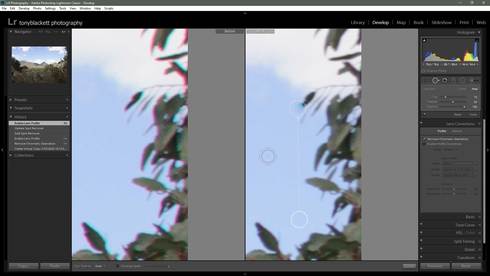 This has always been a problem with cropped images, but I didn't realise it is also a problem with lens profile corrected images!I've argued in the past about this problem in cropped images where the spot removal on the edge of a cropped image can sample and blend with image data outside the crop boundary, which is often undesired. Here we have the same problem, except the crop is less obvious.Tony

I am using a MFT-Lens/-Body (Olympus). So, yes - lens correction is enabled (built-in), but I have no option in Lightroom to disable it.

I remember that Lightroom should no longer use samples from outside the cropped area for the spot removal tool, but I do not remember where and when I have read that.

As I clearly mentioned, this is an UN-cropped image, with NO lens corrections enabled or transformations, so my particular issue has nothing to do with any of those scenarios.  I've been using Lr professionally on a near-daily basis for over 10 years, and while it could've been me or some odd situation with the few particular images (but being as it was more than one image I don't think that's the case)... it was definitely behaving differently lately than it used to, so not the expected or usual behavior at all, so I thought I'd raise the issue.Strangely, I just tried to reproduce it to get some screen shots but couldn't.  So maybe it was something odd going on with my computer or me.  :)  But as I mentioned the image had an all-black edge (a groom's tux jacket standing partially out of frame), except for a little sliver area of white.  I tried to remove the white area, sampling with my spot far beyond the white, far into the black.  In the past it would completely remove 100% of the white, leaving only black, but when I raised the issue it was leaving behind some white.  No matter where I sampled, how far into the black my spot was, how big or small it was, etc.BTW, again it wasn't my issue in this case, but I do agree with Tony that it would be great if Lr treated the edge of a cropped image as if it were the actual edge of the image, as far as spot healing goes.  There's been countless times when I've had to un-crop an image before I heal, then re-crop it.  Not a huge deal, but would be nice...

As best I can tell the frame edge Spot Removal Heal behavior isn't something new. It sounds like this should be designated as an 'Idea.' Add a checkbox in the Spot Removal panel named 'Constrain to image' or something like that.

I agree Todd, I'm always in favour of giving the user more control and a 'Constrain to image' option on Spot removal would be just such control.The frame edge spot removal in heal mode problem has been raised before:https://feedback.photoshop.com/photoshop_family/topics/spot-removal-in-heal-mode-doesnt-work-properly-at-a-crop-boundary-edge https://feedback.photoshop.com/photoshop_family/topics/latest-lr-buggy-spot-removal-tool-doesnt-work-right-at-edges-of-image

I Just had a chance to test this with LR Classic 9.2, 8.2, and 5.7.1 on my Windows 7 system. The Clone and Heal Spot Removal does not exhibit the issue with these versions. LR 9.3 can't be installed on Windows 7 so I can't test it on that system, but on my Windows 10 system LR 9.3 exhibits the issue as expected. It's actually quite bad when you compare it to these earlier versions of LR. Interestingly one user in this post is seeing the issue with LR 9.2, but appears he's using a Mac system. Regardless, LR 9.3 exhibits the issue on both Windows and Mac systems and needs to fixed.

Todd, I think the problem you are now seeing with LrC 9.3's Spot healing tool on the image frame edge is a new issue.

Agreed. A bug report has been submitted and acknowledged by Adobe.

Same here: it acts as there would be some pixels outside of image border - it "destroyed" my edits I did in pre-9.3 version - it was "plain white" instead of a strange gradient: 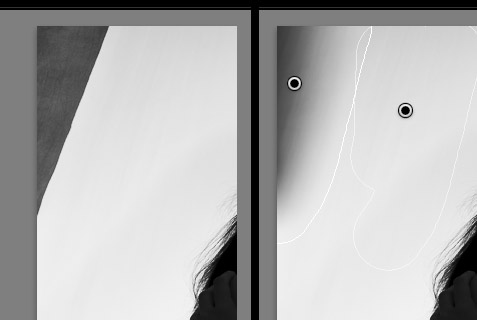 I was about to post this exact scenario.  I used to be able to remove the black umbrella if it crept in to the frame with Spot Removal (Heal) but now I cannot.  This is new behavior for Lightroom Classic.  I'm on 9.3.

As a workaround, I use Spot Removal (Clone) first then a second removal using Heal to blend the edge.  It's a lot more work.

Konrad, if on Windows, ensure that the display settings are set to the defaults for resolution and scaling. Choosing other settings is the only time I've seen this problem on Windows 10.

Just checked some Fuji S2 Pro (jpeg) images with 48 spots removed with 9.2, no issues. Removed a couple additional spots with 9.3.
Also no issues.

Actually, I have those photos synced with the adobe cloud and I noticed the problem on my LR Mobile first, as I was checking if model was doing any new picks/comments - I believe there was also LR Mobile update simultaneously. When I checked on desktop LR (after 9.3 update) the problem appeared, I tried to re-edit and sadly confirmed above behavior...

Bill, this has nothing to do with Windows or display settings. It is a stuffup by the software development team and they need to fix it.

I've had this before and just noticed something that might help.

This is pretty much the default position of the source for the heal (I moved it around a bit during the demonstration).  But if I move the source to the edge of the image then the problem disappears 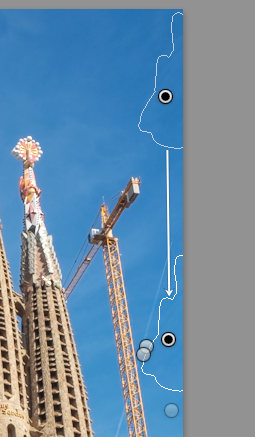 This might not work for every image as not every one will have a suitable edge to clone from, but its definitely helped this morning in a couple of images.  It seems like the heal behaviour is slightly different if the source is near the edge.