I also have an import problem but I see a ghost of the import screen on the regular Library screen. If I press the Develop button I get the full Import screen. This only happens in full screen mode. I have a Late 2015 iMac w 32gb of ram. 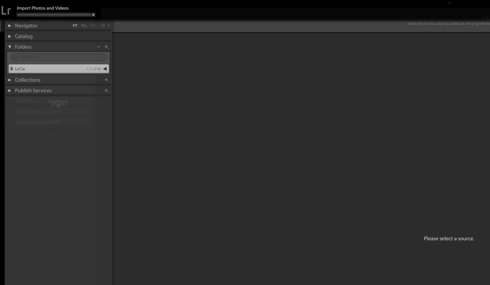 I also have a similar problem with Photoshop superimposing screens. Anyone ideas?

I have a similar issue since upgrading to Mojave. When I click on theImport button the dialog opens in the middle area but the Library panels remainopen on each side and cannot be closed, so it is impossible to Import. I havetried selecting other Modules (Dev, Print etc) and sometimes this clears theLibrary side panels but not always. I have tried different screen modes and seen problem regardless of which selected. Restarted LR but still same issue yesterday. However tried again just now (still logged in from yesterday) and working normally.

I also have the problem. iMac 27", 2017 machine. Just switched to Mojave and I don't get the correct side tabs for Import as described above--so you can't do the import. Stumbled on this though---press the 'i' key...takes you to the Import module!

This reply was created from a merged topic originally titled Lightroom Classic: Scroll bar jumps around within "collections" when results are ....

As the title suggests: The scroll bar erratically jumps around when browsing through collections in the left hand bar *only* when a phrase has been entered in the "filter collections" section.

This bug has been going on for quite some time. I was hoping it would be fixed in the latest 8.2 update. I just updated and unfortunately it is not.

Hi Jacob,
We have logged a bug for the same and a fix is underway.

Thank you for the attention. However, the import dialogue issue is something completely different than what I described. Assuming you logged the bug under the import/side panel issue, it has been incorrectly logged.

We have logged a bug under 'collection panel jumping' criteria.
I hope this is the same issue you are referring to.

"collection panel jumping" sounds like a good description.However, my comment had been merged into a thread called "Lightroom Classic: Side panels erratically overlay import dialog (latest macos)" that is definitely *not* what my comment is about.

If the bug has been properly logged, perhaps it would alleviate confusion if the threads were unmerged?

Lightroom Classic 8.3 was released today and contained a fix for this issue. Please update to 8.3 and verify that you are no longer seeing the issue. Thank you!

If I insert a memory card when the side panels are showing, the import window appears, but the side panels don't automatically hide like I think they used to do before. I cannot hit the import button down to the right because it is hidden behind the right side panel from the library or develop module. The show/hide arrow icons on each side panel are gone, and sometimes the keyboard shortcut (Shift + Tab) doesn't work either. Then there is no other solution than to force quit Lightroom and try again.

Yes! It’s been a bug for a long time now. My experience: it only happens when you’re in Full Screen Mode; sometimes when I forget and I’m in full screen mode Shift>I will iron it out—sometimes. It’s really annoying.

Hi folks! I've also just experienced this issue on LR 8.3.1 (on Mojave 10.14.5) when the Import dialog popped up automatically after connecting my phone to charge. Hitting the Tab key did not work for me. As noted above by Matthew Zory, LR was in fullscreen mode when this happened, and taking it out of fullscreen mode solved it, but that is also subject to a currently unacknowledged bug with LR 8.3.1 on Mojave - the green fullscreen mode toggle button (in fact, the entire bar with that button) disappears once LR is in fullscreen mode and Control-Cmd-F also stops working.So the current workaround to exit fullscreen uses one of Mojave's Spaces control features. (In fact, instead of saying LR is in fullscreen mode, it's probably more accurate for me to say it's in fullspace mode as clicking the green fullscreen button moves LR to its own separate space where it takes up that space's entire desktop.)If you press Control-Up Arrow (or Fn-F3 on the Apple keyboard) you'd get the Mission Control view showing any apps currently open as well as any Spaces at the top of the screen. One of those Spaces will have LR in it. You can just click and drag on the LR space to move the app from its Space back onto the main desktop space, and LR will revert to its normal position and size before you clicked on the green button (in effect, the same as if we were able to click on the green button to toggle maximise off).If anyone from Adobe wishes to see the associated problem: https://feedback.photoshop.com/photoshop_family/topics/problem-lightroom-close-and-restore-buttons-v...Hopefully this helps you guys to find a permanent fix. In the meantime, customers can use the above workaround to complete their Import and then return LR to fullscreen mode afterwards to continue whatever processing they desire. If you wish to learn more about Spaces: https://appleinsider.com/articles/18/10/12/how-to-use-spaces-apples-mostly-ignored-macos-mojave-prod...Hope this helps...

This reply was created from a merged topic originally titled GUI bug in import dialog.

There is a GUI bug in LR classic:The import dialog should come in front of LR's interface. However, when opened, it stays behind the panels, as can be seen in the screenshots below. This happens when using the "import button" as well as using the "import to this folder" option.The lateral panes do hide the import GUI: 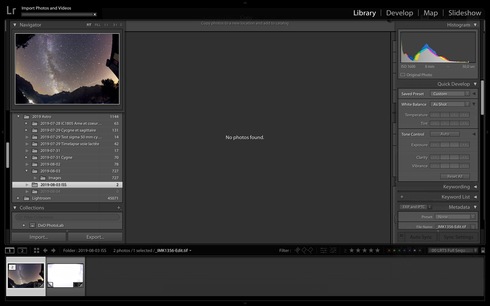 The lateral panes can be hidden using the TAB key but the little triangles are missing. The upper and lower parts of the import pane remake hidden: 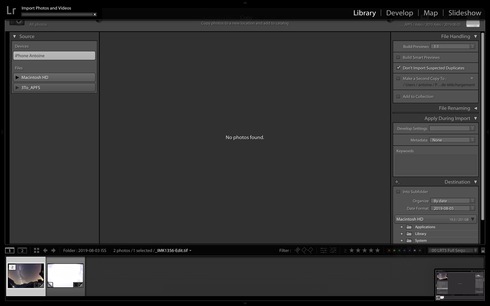 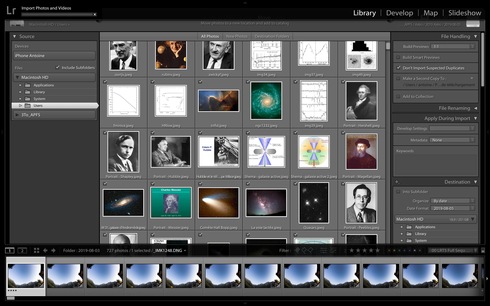 Was fixed... (at least didn't experienced it for a while) then BAM! came back with 8.4

never fixed for me.  However, I’ve found that if I double click an image, then hit G to get back to grid view, it seems to correct itself.

The status on this bug (see top of page) is Acknowledged. When the bug is fixed, we will change to status to "Solved".  Normally we also post an update to the message thread when it is fixed.This issue is still open in our system.

Rikk, you can understand people’s frustration about Adobe not delivering what’s been promised with the change to the subscription model instead of perpetual licence: an always up to date software. Nine months and four versions of LR without a fix doesn’t seem to fulfill te contract.

I don’t really mind because there’s a workaround, but it feels like LR classic is not a priority at all. I wish I were wrong.

« This issue is still open in our system. »
That’s precisely the problem: FIX IT!

This reply was created from a merged topic originally titled Lightroom Classic 8.4 bug: import folders hidden by Library side panels when view....

BUG REPORTI have encountered a problem when attempting to import photos when working in Lightroom Classic's Library module (with the window displayed full screen), with both left and right side panels displayed (not self-hiding).   When I attempt to import photos, the Import screen appears, but the standard Library side panels are covering where you select the folder, as well as the button to import, such that all I can click on is a tiny sliver of the "Cancel" button that is sticking out from under the right panel.  If I click on the arrows to hide the Library side panels BEFORE clicking "Import", then I can import as usual.  However, if I have clicked "Import" first, I can't even do that because the arrows to hide the side panels disappear.I have contacted Adobe Support, and the fix was to disable my graphics processor, restart, and then re-enable  it, which allowed everything to work normally exactly once, just long enough for me to think Support had fixed the issue.  (And which I was able to duplicate myself, working normally exactly once, by performing the exact same steps later.)I am currently running Lightroom Classic 8.4 on an iMac that is just a couple months old, on Mojave 10.14.5, with a Radeon Pro 580X 8 GB graphics processor.  I had the same problem with the previous Lightroom, and unfortunately it was not fixed in the just-released update.Here is a screenshot after clicking "Import", where you can faintly see the import folders behind the left side panel, and maybe even make out the sliver of the "Cancel" button on the right. 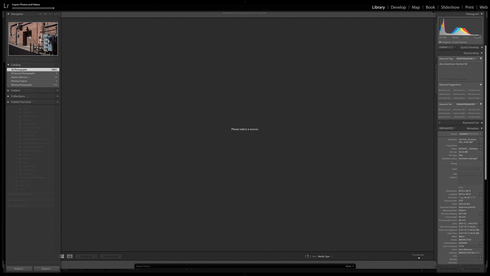 I upgraded to LR classic 8.4 last week. I have a macBook Pro running Mojave that is up to date. All is well except for Import. three times now (of approx 12 times) after I click on "import" the window one usually sees to permit selection of source etc is hidden behind the regular view of the Library window, and so no selection or "cancel" is possible. The only work around i found is to command-Q to quit Lr and then to Force Quit LR in sequence... then its fine for a while.

A more reliable workaround is to drop out of full-screen mode before going to the Import window.

Another workaround (simpler in my opinion) is to hide the offending panes by pressing Shift + Tab.

Even though the problem is easy to work around, I find it quite unacceptable that this problem has been around for months, and through numerous updates, and still has not been fixed.

You don't understand, Byron. That's why a subscription based licence is better than a perpetual license. So pay monthly but you'll have a forever up to date software. Amazing!