Although I just noticed this problem in Lr Classic 9, it appears to be present in at least Lr Classic 8.

When I edit a large raw image like a panorama DNG, I am experiencing a significant lag between the White Balance Selector position and the sampling Loupe while moving the Selector around the image when the Dehaze setting is non-zero. Associated with this lag is a complete paralysis of Lr, which goes into a “not responding” state and blacks out the screen for a second or so, then comes back for a short time before going black “not responding” again. It repeats this over and over until I set the white balance with a click or replace the WB Selector on the basic panel.

Here’s an example. I have a wide panorama image open in Develop with no settings applied. I created a new catalogue with only this image for my test. Select the White Balance Selector and move it around the image reasonably quickly. The Loupe follows the eyedropper around the image with barely any lag. I have hovered over the blue sky to make the Navigator preview show a very warm image, as seen in the screen shot below. 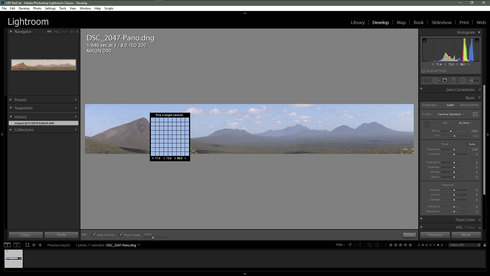 Replace the WB Selector on the Basic panel. Change the Dehaze amount from zero to any value, even just +1, as I have in this example. Select the White Balance Selector again and move around the image as before. Now there is a significant lag between the position of the Selector (eyedropper) and the Loupe. The screen may go black while doing this with Lr going into “not responding”. I stop moving the Selector around and hover over the blue sky as before. In the screen shot below you can see the warm image in the Navigator preview. 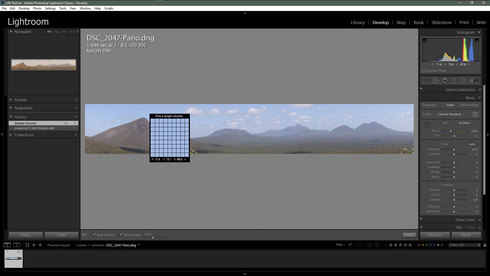 After a few seconds the screen goes black for a second or so, like the screen shot here. 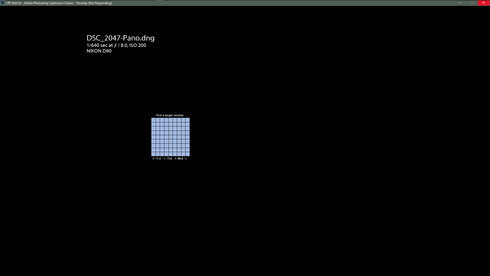 Lr then recovers back to the normal screen, but then goes black again after a short delay, repeating this sequence until I set the WB or deselect the WB Selector.

The problem seems to be even worse if I have more develop settings, such as, Lens Corrections and Basic adjustments set manually or using Auto, but disappears if the Dehaze amount is set to zero.

I have tried turning off the GPU. This still has the significant Loupe lag while moving the WB Selector around the image and LR occasionally goes into “not responding”, but the screen doesn’t go black, although it might black out a portion of the screen.

I would be interested to know if anyone else experiences this problem.

I can duplicate this LARGE delay of the White Balance selector when Dehaze is NonZero on a large Pano.  It doesn't happen when Dehaze is Zero.  In fact it doesn't have to be a large pano, there is some delay on a single photo with Dehaze at NonZero.This is with full graphics enabled or off.Lr9.0 macOS 10.14.6

Dehaze is very expensive from a computational standpoint. If used in conjunction with a Lens Correction I would expect the lag to be significant. White Balancing is normally done in the first stages of processing to avoid this.It would be helpful to know what "Serious Lag" really is. Is it 1 second? 10 seconds? 60 seconds?It would also be helpful to have some system specs including your video card.

I don't do a lot of large panos so the issue is just an annoyance for me.

BTW, the increased overall speed improvement in the develop module and Library are welcome additions.  My next machine will have more graphics memory!!!!

I am testing in a 3440x1440 monitor using an nVidia 970GTX using the 441.12 driver and am seeing about a half-second delay with extreme Dehaze (positive and negative adjustments). With a zero Dehaze setting I am seeing no delay.  While not optimal, it is far better than the 5 and 20 seconds being reported here. Do you see the same delay in Adobe Camera Raw?

The delay depends on the size of the photo you are working on.  Did you do the test with a LARGE pano?  I only get a small delay on a single RAW file but a significant delay on a large pano as noted in my reply above.

In ACR the RGB numbers update immediately whether Dehaze is Zero or NonZero but ACR does not display the target box like Lr does.  In Lr, the eyedropper moves quickly but the update of the target box takes several seconds

Rikk,My example pano is 28508 pixels wide and 4326 px high. ACR is completely different to Lr since it only updates the colour values for the cursor position. The film strip thumbnail doesn't update as the navigator preveiw does in Lr and as Robert has said, there is no 'live' updating Loupe following the Selector around as you move the cursor over the image. So ACR does no image rendering until the image is clicked.Thanks to you and Robert for testing.Tony