Lightroom Classic: Limit of 52 reorderings in custom-ordered collections and folders

After a while of custom sorting the order of photos and stacks within a collection (using Grid View), Lightroom starts to unpredictably refuse to sort photos. Some will get positioned where I drop them, others won't move at all and yet others will get positioned somewhere close by (eg. 4 or 5 photos before or after).

After digging into the catalog file I've come across what I think is the problem, but don't know how to fix it. In the attached file you'll see a screenshot of the database table for the collection, you'll see I've hilited the images that are part of the same collection, but their positionId is identical (which should never happen I'm assuming), probably due to the field size reaching it's maximum length. This is what I believe is causing the problem. Tested this on both Lightroom 5.7 and CC 2015.8.

This is a major bug and effectively stops user sorting from being functional, as well as now having potentially lost weeks of work. Any suggestions? 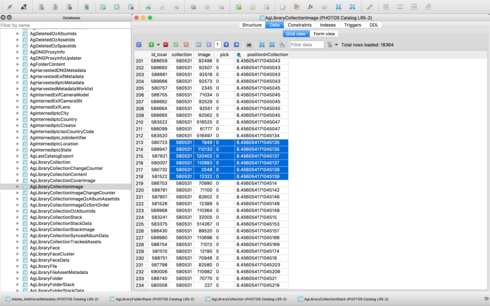 A small amount of investigation shows that LR is using an inappropriate algorithm for representing custom order.  This algorithm allows for at most 52 insertions just after a given photo in the custom order. To reproduce the bug:

1. Create a collection with 3 photos.
2. Do View > Sort > Custom Order.
3. In the Collections panel, select the collection.
4. Drag the the third photo between the first and second photo.
5. Repeat the previous step 51 more times.
6. Now repeat step 4 one more time, and observe that the custom order doesn't change.

Thus, you can do 52 insertions after the first photo, but not 53.

1. After no more than 30 insertions after any one photo in a collection, select all of the photos in the collection.
2. Do Library > Create Collection.
3. Select "Include selected photos".
4. Delete the original collection.
5. Rename the new collection to have the original's name.

The new collection should have the same custom order as the original, and it will allow at least 30 insertions after any one photo before triggering the bug again.

ANALYSIS OF THE BUG

LR represents the custom-order position of a photo within a collection using a 64-bit floating point number. Initially, the photos have position values 1.0, 2.0, 3.0, etc.  Suppose there are two adjacent photos A and B in the collection's custom order, and their positions are A.position and B.position.   If you insert photo C between A and B, then:

This might seem like a clever hack, allowing a photo to be inserted without reassigning the positions of the other photos in the collection.  However, as seen above, it fails after a fixed number of insertions.

The fix is straightforward: If A.postion = (A.position + B.position) / 2, then A.position has to be decreased a little or B.position increased a little to make room for C.position. In the extreme case, that might involve changing the .position of the photo preceding A or the photo following B, possibly rippling through the entire collection in the worst (but highly unlikely case).

What's the likelihood this will ever be fixed?  Vanishingly small, in my opinion.

"This algorithm allows for at most 52 insertions just after a given photo in the custom order."

John, thank you so much for this detailed reply!

I tried your workaround and it "almost" solves the problem. While it does keep the custom sort order and resets the "positionInCollection" number...the new collection doesn't unfortunately maintain Stack relationships.  So my two scenarios are I either:

b) Expand all Stacks, select all and create new collection, which ends up with the correct order but all stacks have been broken.

I'm using stacks to group duplicates/variations of a single photo and have >10,000 photos that I'm trying to sequence and group into stacks. So far it's proving very difficulty to actually achieve this due to this bug.

Any thoughts on how to tackle Stacks using the workaround would be greatly appreciated.

Oh, I forgot about stacks. (LR stacking is "odd", and I only use stacking in folders.)

I can't think of a way of how to correctly handle stacks without using a low-level utility to change the SQL database.  (Plugins can't change stacking once photos are imported.)

In the hope that this bug might be looked at soon, here's sample Lua code illustrating a correct algorithm for inserting photos into a collection and maintaining the custom order.

This code assumes that "nInserted" photos have been inserted at ordinal position "i + 1" though "i + nInserted" and there are a total of "nPhotos" in the collection.

The algorithm tries to minimize the number of entries in "position" that are changed (since those entries will be written back to the catalog database).  It tests whether the inserted photos can be correctly assigned positions between position [i] and position [j] (without exceeding the precision of floating point numbers); if they can't, then i is repeatedly decreased by 1 or j increased by 1, alternatingly, until there is "room".

As special cases, a range of photos at the beginning or end of the collection order will be assigned integer-valued positions.

Update: As a stop-gap solution, I'm resetting the position IDs using SQL queries directly on the SQLite catalog file. It's not pretty but it seems to work for now. Code below in case it's useful to anyone:

STEPS:
1. Create tmp table with a unique, auto-increment col for order_id
2. Copy into tmp table from source with order by collection and position
3. Update the position back into source from tmp using order_id*100 for position (to buy extra re-orders)

This reply was created from a merged topic originally titled Custom order in folders fail.

I'm now having a second drag and drop issue. I don't know if it's related, but here's what happens:

I begin by dragging individual photos, one by one, further up in the order on the grid. I'm doing this because when I scanned the photos, they were scanned in reverse order so I need to reorder them.

To do this, I select an image upwards on the grid to mark my insertion point. I then drag photos from below in the grid, and drop them in front of the selected photo. This works fine for a while, but after a number of drags and drops, the selected photo "freezes."

What I mean by this is, I am no longer able to drop photos in front of the selected photo--when I let go of the dragged photo, it actually lands behind the selected photo, even though I dropped it in front. At first I didn't realize this was happening and it really messed up the order of my photos!

Now that I see it happening, I can fix it: I drag the selected photo, and drop it behind the photos I recently moved up (that landed in the wrong spot). After I do that, everything is fixed, at least for a while. Then it randomly happens again.

It's clear to me there are some bugs in the drag and drop functionality of the Grid view. Perhaps this is not a typical use case for Lightroom. I'm a photo organizer, not a photographer. I take my clients' photos and organize them and add metadata. The order matters because often clients have a legend, at least for trip photos, that identify each image. I need them in the right order so they can be tagged correctly.

Many of my clients' photos are paper and must be scanned. And since the scanning process often gets them out of order, I have to reorder them manually--hence all the dragging and dropping.

Unfortunately there isn't anything I can screen grab of here, but hopefully I have captured the steps that cause the bug. Please let me know if I should move this to a new thread.

Note: This conversation was created from a reply on: Lightroom: After an unsuccessful drag of an image, dragging is no longer possible....

You've stumbled across a known bug -- LR uses an inappropriate algorithm for maintaining custom order in folders and collections, allowing you to do only a relatively small number of insertions between any two pics.

This should reset LR's internal numbering and allow you to do more insertions.  (But eventually, you'll have to reset the numbering again.)

Thank you John. Since I have to do a lot of reordering, I may just delete the I tagged folders from the catalog, reorder them in Windows explorer, and reimport them into the catalog. Then I shouldn't hit the bug. What a pain!!

This is serious for me--an extremely bad bug that is killing my workflow. I guess I'll have to try exporting these pics, maybe to Bridge, and see if I can sort them there. I hope I don't lose the metadata I've already applied!

Going forward I guess I'll work in another app to reorganize the files and rename them to keep them in order. Then maybe I'll try Lightroom for just the metadata. Very discouraging.

"When I finished the entire group of files was completely scrambled!"

As an addendum to my post above, I'm not working in a collection--I haven't created any collections. I'm working on the images in folders. However it seems likely that it is a similar if not identical issue causing the problem.

My work around may be to reorder the photos in the file system folders before importing into LR and avoid the bug altogether.

I'm curious--if you are interested, follow the link to my other reordering issue in my post above. I'm wondering if the bogus error message I get is also related to this problem.

It is disheartening to hear Adobe is unlikely to fix this. It breaks work flow, and it sounds like it is potentially losing data if the db entries are messed up. That seems serious enough to deserve a fix.

It was just my surmise that the bug wouldn't be fixed soon, based on other similar bugs.  I don't work for Adobe and don't have any inside information about it.

"I'm wondering if the bogus error message I get is also related to this problem."

We have a fix in Lightroom Classic 7.1.
Could you please have a look and let us know?

LR 7.1 appears better but still has a bug.  When testing with my recipe above:

Thanks, John.
Let us check again.

I'm running into this issue in Lightroom Classic 7.4

Matt,
Could you please let us know what exactly the issue you are facing?

This bug has resurfaced in LR 8.1 (or earlier).  You can once again do no more than 52 reorderings at a given point in a custom-ordered collection or folder.  See the original recipe for reproducing the bug: https://feedback.photoshop.com/photoshop_family/topics/lightroom-major-bug-with-custom-sort-order?to...This was reported fixed in 7.1, and I supposedly verified the fix (see above), so either the bug has resurfaced or my verification was mistaken.* * *Here's a dump of AgLibraryCollectionImage.positionInCollection after the 52nd insertion and then after the 53rd insertion.  Notice that the positions of the 2nd and 3rd photo become identical after the 53rd insertion:

Using the latest (12/12/2018) Lightroom CC classic 8.1, I am having problems with custom photo sort order.  I have a folder that contains a number of JPG and RAW images from both my phone (Galaxy S7) and my SLR (Nikon D610).  The images were sorted into a custom order with only the SLR photos in the folder prior to the 8.1 update.

Today I merged the camera photos into the folder which lead to the problem.  (Also today I updated to the latest 8.1).

I cannot sort the JPG photos (by dragging them to a new location - they do not move).  Also, if a SLR photo is between the JPG photos, I cannot move it either.  The JPGs are all at the front of the album.  I can move the SLR photos that are after all the JPG photos.

I verified that the limit of 52 reorderings applies to folders as well.  Internally, LR 8.1 is using the same buggy algorithm as when the bug was first reported.  I don't know if 7.1 actually fixed this temporarily or my verification was faulty.