I have a collection set with 27 collections I need to share. How can I share this with a client without losing the "folder structure" and without sharing 27 different albums?

There is a very simple and user friendly solution. Subscribe to Smug Mug, Download the Lightroom-SmugMug plugin, and you will have infinite options, including sending a link to your client for them to view the folder and the collections(Galleries in SmugMug). Uploading from Lightroom is one click for each Gallery

You could also do a free (if you have the Photo Plan) Adobe My Portfolio website, add all the collections to the webpage, (which RETAINS a custom order). Then, under Settings/Lightbox for Images, click "Enable lightbox for images on my pages". Then they can see each image the full size of the window. They can also "favorite" shots to choose them. Cheaper than SmugMug!

Converted to feature request. Vote for this by clicking the button at the top of the page.
Adobe Photography Products

I'm really surprised. Is there really a chance to see this implemented, despite Adobe's decision do ditch sync on Classic ?

Now LR mobile has "folders" and LR classic has “collection sets" what basically the same. The ability to sync them would be really great and will make the working with big images database (150 000+ images) much simplier.

Indeed, but:
1) Adobe has decided to stop sync updates to classic
2) Collections can be smart which might cause troubles in certain specific cases (infinite loops, ...)
3) "Feedback and feature requests? Let's implement tutorials no one asked for"

1) Adobe has decided to stop sync updates to classic

I have't seen this info.  Can you provide URL or other reference that supports this statement?

Classic still syncs fine, @Antoine, where are you getting this info?

@Dan You probably won’t find any official statement from Adobe, but I admit being too lazy to search. It has been repeated many times on this forum, mainly in threads requesting updates ... regarding sync, notably the keywords and faces. I invite any mod, employee, champion or queen to correct or confirm this.You’ll find this, however: 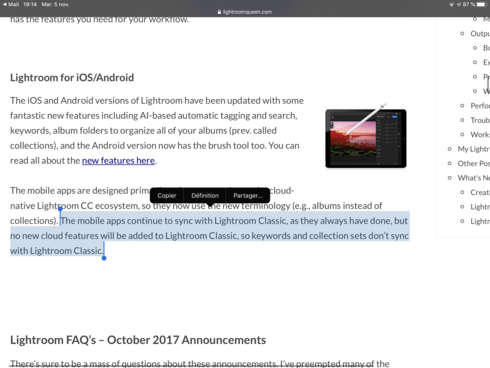 https://www.lightroomqueen.com/the-future-of-lightroom/
Written by Victoria which probably knows LR better than anyone. I ignore her relationship which Adobe but I strongly doubt she’s just a regular customer

Okay,  so no change.

I really do wonder what Adobe Management's rationale is in regards to syncing as it is clearly something in high demand by their user base.  Yet they seem to think about it only as temporary tool to get folks to move from Classic to Cloudy.  I think that if they added bi-directional Keyword sync in a future release that it would have a broader and more positive reception than pretty much anything they've added since DeHaze.

Er, yeah, I guess I kind of know my stuff. Consider me a go between, fighting for what’s most important for you, and trying to explain what’s going on behind closed doors too. Stuff can always change though. Adobe’s surprised me a couple of times over the last 12+ years.

@Dan Because Adobe is, or has become, a « follow the money » company. I have nothing against chasing profit, but in our case it’s clearly detrimental to photographers. They’re not after the photographer anymore, but after smartphone users. And Classic is clearly left for dead, just look at the release 9 and keywords not syncing is not the only thing, but clearly symptomatic of their decision.

@Victoria, you know I really appreciate your contributions on here and would never criticize you for Adobe’s decisions. But I don’t appreciate the lack of clear position with regard to the future of LR and the way they’re relying on go betweens for passing down messages, especially with regards to missing features and bugs.
Why the need of « Champions », can’t they communicate officially ? What are the champions’ status ? (Not that I care, but that adds ambiguity). Can’t Adobe officially say: fuck you, you won’t have this or that update because we don’t are about you ? Champions often have to play the « bad cop » justifying management decision without being totally official.

Regarding being surprised : I wouldn’t count on it, as their direction seems clear to me. And I don’t want to be surprised; if I pay a monthly subscription instead of a one time purchase, I want to be sure of what’s coming, not counting of being surprised. (It’s an impersonality « I »)

>  I don’t appreciate the lack of clear position with regard to the future of LRTo be fair, they have stated their position quite clearly.

We have introduced a new photography service that will now be called “Lightroom CC”. It is designed to be a cloud-based ecosystem of apps that are deeply integrated and work together seamlessly across desktop, mobile, and web.

Lightroom Classic CC is designed for desktop-based (file/folder) digital photography workflows. It’s a well-established workflow solution that is distinct and separate from our new cloud-native service.

By separating the two products, we’re allowing Lightroom Classic to focus on the strengths of a file/folder based workflow that many of you enjoy today, while Lightroom CC addresses the cloud/mobile-oriented workflow.

> What are the champions’ status ?It's just recognition of helpful volunteers who know their stuff. It's like Microsoft MVP's.

You know what I ment:
They didn’t say: « We will continue cashing in you monthly subscription without making any significant updates anymore ».
At the time of this blog post in 2017, and I think it is still the case right now, LR cloudy is far from being as powerful as Classic. Most if not all updates were either cosmetic, either integrated in camera raw which is the engine of many apps.

Whether there have been significant updates is a matter of opinion. This is the stuff they added to Classic since it went subscription: What’s new in Lightroom Classic since Lightroom 6?  That's the kind of level of new features I'd have expected in perpetual upgrades over a similar period. Some of those new features will be of more or less value to you, and some benefit the whole camera raw ecosystem rather than just Classic, but the same was true of perpetual upgrades in the past.

And none of this has anything to do with the topic of this thread! ;-)

What's the status of this request?

The status is at the top of the page. An explanation of these status can be found at this document: https://feedback.photoshop.com/photoshop_family/topics/getting-the-most-from-this-forum-feature-requests-ideas
Adobe Photography Products