I have a number of export presets that involve exporting to a folder on the desktop with a renaming of the image. When I export using one preset only, LR properly sets up the folder (or adds to the folder if already on the desktop) with the files being named name.jpg, name-1.jpg, name-2.jpg etc

If I export to two, or more, presets at the same time using the great new feature in LR Classic, it works well and numbers the images correctly ONLY if the folders do not already exist on the desktop..

If I export to two or more presets and the folder already exists for a preset, then the file numbers for the images being added do not follow the naming protocol specified. The naming of the new newly added file(s) takes on the name of the preset.

I would have thought it should have carried on and named it M2001-5.

(If I add to an existed folder exporting only using one preset, the numbering is correct, it just carries on from the last number)

There's a scenario of: when one export preset is overwriting files generated by another export preset, just adding numbers would not be clear on which file was exported by which preset.

Jerry- guess my explanation is not fully clear. It is the same preset being used. There is no overwriting of files, simply adding to files already in the folderIf  the preset is used solely, the numbering is correct whether or not the folder existed on the desktop. But when the preset is used along with another preset, then the numbering is "wrong" if the folder for that preset already exists on the desktop.The same behaviour is observed with any export preset when used in a "group" export. It is not an issue with only a particular preset.Not sure that is any clearer????

Click the "Learn More" at the bottom or the export dialog when multiple presets are selected to see some restrictions.

Thanks Robert.  Guess that is what is happening.When I export from a single preset, the file numbering is handled fine even if there are already some images in the folder being exported to - LR just carries on from the last number in that folder. Would have been nice if that happened with Multiple export as well. I assume there is a valid programming rationale for it.

Although there are no entries in the Export Filename dialog that is like your examples I assume you meant the following.

Creating 4 presets like you did and selecting them all in the export dialog I got the following files exported.  As you can see the export worked correctly. 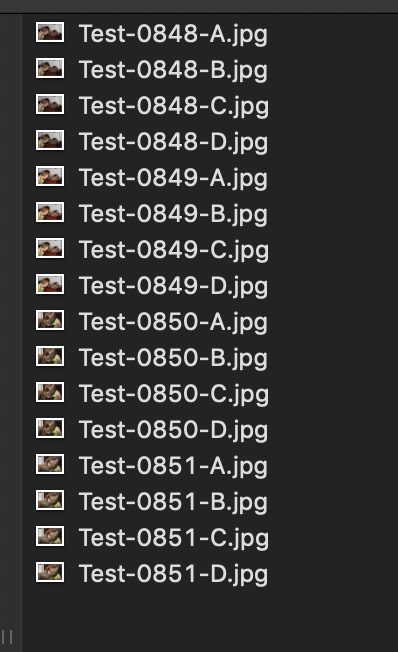 I don't know what you did to get the messed up file names but it worked correctly for me.

Thanks for your further investigation. I am a bit lost in translation, so thats probably the reason I didn't get the translation in the right wording.
Based on your information, I think the pictures with the wrong naming are the ones that are virtual copies. Is this possible, that the naming uses virtual copy numbers instead of ImageNumber+VirtualCopy-number?

Sorry for the harsh comment, I just waited for 2000 Images to be processed like that and was going mad about the naming stuff, which rendered all the time useless ;-)

First, I never thought your comment was harsh.  You were just stating your results.  There are a lot of bugs in Lr and I thought you might have found a new one so I was testing.

I am not sure what the virtual copy will be named under this scenario of multiple exports but I would think it would be the" rename + the preset name" as indicated in my first post screen clip from the Adobe documentation.  I will try a virtual copy in my next test.
One thing I thought may be happening is you stated it was random.  I only tried about 30 photos a couple times so my test wasn't a large sample.