and that works fine.

But I am looking for the edit date in the Library / metadata and was not able to locate it.

Does anybody know where is this edit date is visible ?

See if this works for your needs:Metadata. Select "EXIF and IPTC". Metadata date near the top.

I made one change to a RAW file and looked at the properties of the file as well as inside the XMP. That is the the edit time.

not for me maybe you enabled in the catalog settings Automatically write the changes in XMP ?

I do write to XMP. Always. But I guess what you are looking for is just in the catalog then, or at least that what Smart Collections is looking for. Good luck.

You can use the Anyfilter plugin created by John Ellis. Many search options by 'Last Edit Time' are provided. 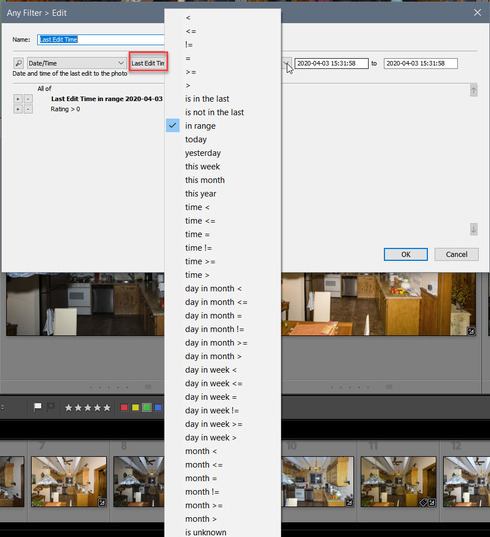 Thanks Todd, I didn't know about this one.
Are you using it ?
Do you get the results int the LR filter window or a seperate window ?

Chris, if you create a Smart Collection. called say "Edited on Date", and you select "Edit Date" is "Today", then you know the Edit Date. You can select any other dates for a Smart Collection and know those edit dates. Other than installing the Anyfilter Plugin, does that solve it?

I don't recommend using Any Filter to search Last Edit Time (Edit Date).  Any Filter uses a custom metadata field to track the result photos of searches, and when Any Filter changes that field in a photo, LR will set its Last Edit Time to "now".  There's no way for the plugin to prevent that, unfortunately.It's also not possible to create a custom tagset to display Edit Date in the Metadata panel, as it is with some other "hidden" fields (such as Subject Distance). The best you can do is enable Catalog Settings > Metadata > Automatically Write Changes To XMP, and then the field Metadata Date will usually be reasonably close to the actual last edit time (within a second or two).

John, thank you for the clarification!

Ok thank you everybody for your help.Following Carlos advice, I did modify the date before x.x.x in the smart collection.The result is empty before June 2019 which is not possible as I'm using LR since 1.0So most probably as John said, something ? erased the real date.What I am trying to do during the stay@home..., is to go over my early edits as LR improved quite a lot and so I did (at least I hope) with lighter and better edits.I am going to do it by selecting old cameras and by the date the pictures were taken.

I'm in a similar process. While I reprocess many old shots based on LR and skill improvements, I have also encountered a number of images that had their original adjustments trashed - it looks like at the time of metadata updates in the history panel. Lens profiles, all detail settings, all basic settings were zeroed. Not sure how it happened but could be related to my trying Capture One and they dorked my catalog, which definitely royally screwed up things. I was able to restore my LR catalog to the one before their process trashed it since I did a backup, but there were a number of XMP files that were really hosed and their changes overwrote my LR edits. (Just a warning for others tempted by promises of greener pastures.)

I noticed something similar many years ago with a lot of older image files having no adjustments. I'm fairly certain I had adjusted many of them so I'm guessing one of the LR upgrades (1>2>3>4>5) wiped out the settings. I've been using LR since 1.0 so it's not surprising something like this happened. BTW- I've never imported my LR catalog into another raw editor like Capture One. It looks like the LR 3.0 upgrade (June 2010) may be the culprit when PV 2010 introduced, which is now called Process Version 3. Files imported after that date don't appear to be missing edits.
To find the files with missing adjustments and those shot with the earlier Process Version 1 and 2 I used the below Any Filter settings. Notice I have 'Save results as a collection' checked, which will allow you to do additional Library Filter searches on the collection such as by Date or Camera. PV 3 was the first process version to introduce the image adaptive Tone controls so any images that have been edited with PV 3 or 4 will see the least benefit from updating to PV 5. You probably want to do that on an "as needed" basis when you revisit those images for output. 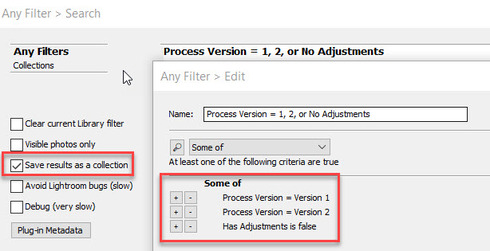 For me, this would have been LR 8.x. I estimate about 1/3 of my files might be affected and there are some common dates - 10/18/2018 and 6/1/2019 are ones I've looked at which impact multiple files. Your theory about an LR update is still a good one, I update often (and I'm on the beta program so more often than most). Another possible source is syncing, still looking into that one. I stopped using LR Desktop and rarely use LR on my iPad. And turned off sync but it seems to turn itself on again.

PV doesn't matter so much as nearly all adjustments are gone anyway.

With lots of time (I'm retired anyway), I have been doing a lot of reprocessing because I'm smarter now :) I did notice this months ago and was only tackling images as I worked on my flickr collections.

LR 8.0 (10/18/2018) introduced Process Version 5, and it automatically updated photos to Process Version 5 if you took them into Develop (even if you didn't make any changes). Over the years, there have been a number of problems with such auto-updating of various fields, so perhaps your 11/30/2018 dates were from another instance.

One other suggestion I forgot to add is that you can batch apply the new PV 5 Adobe Sensei Auto Tone function to speed the editing process. Don't forget to update the image to PV 5 as the first step. More here:

"So most probably as John said, something ? erased the real date."Any change to develop settings or metadata (e.g. caption, keywords, or capture date) will change the Edit Date, unfortunately.

Yes I think that the process version update must have changed the edit date.Thinking about it, there 2 other things might have update it :- before a major LR update I do a save on all the pictures in the catalog and that updates the xmp file- when the lrcat grows to much and slows down LR, I remove the historic developmentAnyhow, I think it's too bad to have some data stored in the catalog, like the edit date, and not being able to see it easely.