I like working with LR and it's the software product I use the most. It's a good piece of software and I never had any troubles working with it and I always was a happy user. (German keyboard layout on a Mac)

But in the new LR version the keyboard shortcuts to rotate images have been changed, unfortunately to the worse. From (Command+) and (Command+.) to (Command+<) &
(Command+#). You did fix something that was not broken.

Here's what these new shortcuts do:
1) They only work for me when an image I have fully zoomed into an image.
2) The shortcut to rotate an image clockwise (Command+#) is the same as the one to zoom into an image (Seriously?! Did no one double check that before the release?).
3) In the previous LR version you could rotate images with the shortcuts in both directions without having to use two hands on the keyboard because the keys for both directions were right next to each other (, & .). Now the keys used for this are on the opposite ends of the keyboard (at least mine, which has a German layout).

I really hope you come up with an update to bring back the old shortcuts to rotate images.

While you're waiting for Adobe to fix it, this might help https://www.lightroomqueen.com/custom-keyboard-shortcuts/

Hi Victoria,
thank you for your help. I'll try that until Adobe hopefully fixes the problem.

I have the same probs. For me this shortcut is essential. So if it would not be fixed, i will use alternate software.

As long as adobe did not fixed the bug, you can change your workspace to english language. Than you can use the shortcut ALT+5 oder ALT+6 to rotate your images. if you're ready, change language again.

There are four separable issues:

2. The shortcut for Rotate Right (Cmd/Ctrl + #) is also assigned to Zoom In.  This certainly wasn't intentional.

3. The Help > ... Shortcuts screens weren't updated to reflect the new keyboard shortcuts.  (The items shown in Help are manually edited, not generated automatically from the actual assignment.)

4. The shortcuts shown in the menus now uniformly use "Ctrl" on Windows, while the Help > ... Shortcuts screens say "Stg". Someone in the other forum said that German keyboards usually label the key "Stg". This inconsistency comes from manually edited strings and it does not have any affect on the keyboard assignments.

If you want to see or change the text file defining the actual assignments and help strings  see here: https://www.lightroomqueen.com/custom-keyboard-shortcuts/

This reply was created from a merged topic originally titled Lightroom Classic: New zoom shortcut - not possible to enter due to keyboard layo....

With the introduction of Lightroom classic several shortcuts have changed to the worse.
The new shortcuts for zooming are Ctrl+-  and Ctrl+=

It is not possible to enter Ctrl+= on a regular German keyboard: The "="-key is a key shared with the zero: if you want to write  "=", thus you have to hold shift while pressing the zero-key.

Therefore in Lightroom Classic I can only enter Ctrl+0 or Ctrl+shift0. Both are not equal to Ctrl+=, therefore nobody with a German keyboard can zoom via shortcuts anymore.
Moreover, I can also not program my Wacom tablet to do this, since I have the same problem when trying to enter this key combination there.

Result: my whole workflow is broken up now. Everytime I want to zoom, I have to take my pen, go to the navigator, choose... It takes hours more.

As described in the X X's original topic, he was looking at the keyboard assignments documented in the Help, which are incorrect.  (See screenshot below.)

The actual German assignments are as described previously in this topic: Ctrl+- is assigned to Zoom Out, and Ctrl+# is assigned to both Rotate Right and Zoom In. 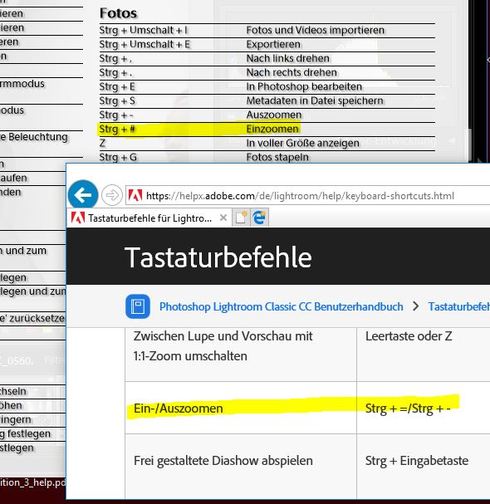 No, that is not true: Ctrl+# works to turn around the picture, as it is described in the online help.

Ctrl+# is no longer assigned to zooming, it is assigned to rotating now. The new shortcut for zooming is Ctrl+=.

And the problem is not the assignment of two functions two the same shortcut. There are two shortcuts now.

The problem is, that you cannot enter Ctrl+= on a German keyboard.

You can verify the actual current keyboard shortcuts for a language by looking at the TranslatedStrings_lr_?_?.txt files: https://www.lightroomqueen.com/custom-keyboard-shortcuts/

By examining TranslatedStrings_Lr_de_DE.txt in LR 7.0.1, you can see that Cmd+# is assigned both to Rotate Right and Zoom In, and the only assignment to Library Zoom In is Cmd+#. (On Windows, "Cmd" maps to "Ctrl".)
There is no assignment to Cmd+=
You can verify this from the drop-down menus in LR: 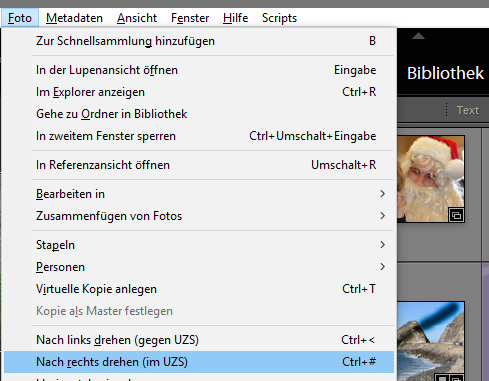 As you've discovered, the Help does not match the actual current shortcuts.

If you're seeing something else in the menus or in TranslatedStrings_Lr_de_DE.txt, please post screenshots.

Incredible, what a confusion for a both, PS and Lightroom user.
Most shortcust are different. For cutting an image you use "c" in PS, but "r" in LR.  The simplest, cmd + for maginfying does not work in lightroom at all! But cmd - does work same in PS and LR.
ADOBE urgendly has to fix this Chaos!
LR + PS on Mac, OS 10.12.1 German Version.

To get this post going I had to logg in with my FACEBOOK account! the Adobe Login failed three times! Does adobe create anything running right at all? I need a software as tool to do my job and not for solving problems in the software!
THIS IS NOT FUNNY!

To get this post going I had to log in with my FACEBOOK account! the Adobe Login failed three times! Does adobe create anything running right at all? I need a software as tool to do my job and not for solving problems in the software!
THIS IS NOT FUNNY!

I am Swedish but useenglish keyboard when i use PS and LR. Keyboard shorts are gone for rotate left and right. So irritating! what ́s the explanation that it takes so long time to fix? Incompetence?

The keyboard shortcuts for rotate left and right in German, Spanish, French, Italian, and Swedish were changed incorrectly in LR 7.0.1.

The tables below show the shortcuts for CC 2015.12 and 7.0.1, in Develop and Library, and the contents of Library > Help > Library Module Shortcuts, as specified in TranslatedStrings*.txt. 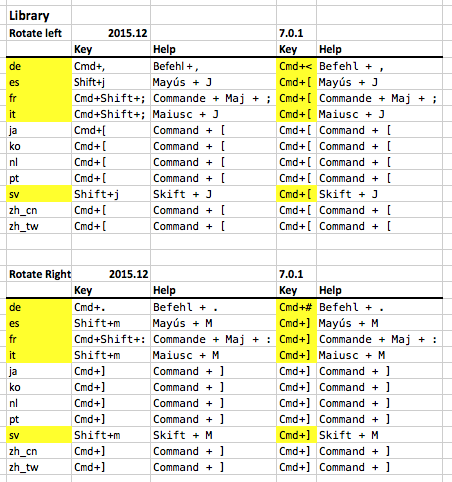 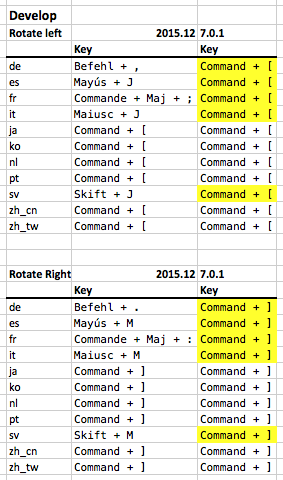 Also, in German, the Strg key is incorrectly labeled as Ctrl in the shortcuts shown in the menus.  This is because of the following change in TranslatedStrings*.txt:

It is impossible to use the rotate photo shortcut on a Italian keyboard since CTRL [   and CTRL ] cannot work.

The [] keys are only available on a Italian keyboard with the ALT Gr key.

I have to use the mouse to rotate photos.

You can change these shortcuts yourself by editing the TranslatedStrings.txt file: https://www.lightroomqueen.com/custom-keyboard-shortcuts/

This solve the problem and match the indication of the Shift+H Windows.

This reply was created from a merged topic originally titled Shortcuts / LR Catalogue from server.

Shortcuts do not work in many cases for example
turn images: CMD+, &CMD+.

For the rest it runs a bit faster

But overall it seems more like a downstep than an update.

See earlier posts in this topic for how to correct the shortcuts yourself while waiting for a fix.

This reply was created from a merged topic originally titled How to rotate a photo in Lightroom CC by using a shortcut?.

I can't seem to get the shortcut ctrl+[ and ctrl+] to work in Lightroom CC(Windows) and using a swedish keyboard. I guess it has to do with that I need to press altgr+8 to get [ and altgr+9 to get ]. So, ctrl+[ dosent work. Neither does ctrl+altgr+8. So, how can I rotate my photos with shortcuts? ;)

I cant believe this. Adobe messes up the workflow of thousends of people and is not able to correct such a small bug within a reasonable timeframe.

This is not acceptable.

In which language are you using LR?  Your post may have been merged into the wrong topic -- this topic is about the shortcuts for rotating photos.

LR 7.1 tries to correct the German rotate shortcuts for Library (but not Develop):
Unfortunately, the shortcut for Rotate Left (Cmd + ,) doesn't work because it is also assigned to Preferences:
Even though this assignment seems to imply it's just for Windows, testing shows it also applies to Mac.

Thx for this info.

I changed  $$$/Application/Menu/Edit/Preferences/KeyWin=Cmd+, to something else and now rotating images works fine for me even in develop module.

The issue for keyboard shortcuts not working correctly for German keyboard has been fixed in the latest update of Lightroom Classic CC 7.2.
I would request you all to please make sure that you have Lightroom 7.2 installed  and let us know if the latest update fixed the issue or does the issue persist.
Regards
Tanuj Sandal

I tested the rotate shortcuts for the five languages involved, DE, ES, FR, IT, SV. They all appear to have workable shortcuts (though someone using ES or FR should comment on the choice of Cmd + ]):

However, the shortcuts shown in Help > Library Module Shortcuts are still wrong for ES and FR.  Whoever edited ES and FR forgot to update the separate entries for that Help screen.

Also, in German, the Strg key is still incorrectly labeled as Ctrl in the shortcuts shown in the menus:

Lightroom Classic 7.4 was released today and should address this issue.  Please update your Lightroom to the latest version and let us know if you continue to see the issue. Thank you for your patience.