Lightroom Classic: Allow to open multiple images as SmartObject in Photoshop into a template

I recently got an idea for a smoother workflow between LR and PS. Consider this:
Sometimes, when for example assembling images of a holiday to show someone, I create a collage of similar objects I photographed (think funny signs or differently colored phonebooths). Although there is an endless variety of options how to place them together, over the last few years, a certain "base layout" has established itself for collages of 2 to 4 images. I recently discovered the advantages of using SmartObjects (lossless scaling and rotating e.g.) and "intersecting" them with paths that can act as a nice border, with added drop shadows etc. I've adden an example here: 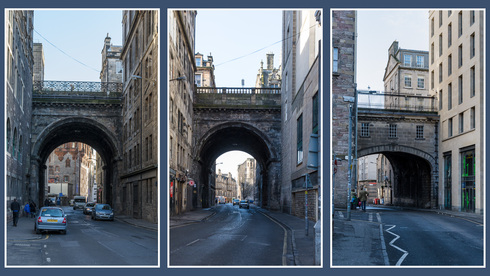 There are blogposts on the internet where people describe how they created a template for e.g. wedding photography, where they can simply exchange the actual photos, but the layout remains the same. That is the line I want to go down.

Let me create templates (using all that PS has to offer) and save them in a dedicated directory (like we have a dedicated directory for lens profiles) (or tell LR what templates to use). These templates consist of all the "necessary" elements sans actual images, so in my example above that would be the A colored background layer and three paths with the same style added to every path. I now want to rightclick on a selection of images (ideally three for my example) and invoke "Open as SmartObject into template". I now either have to chose a template file from disc, can browse the templates saved at the default location, or I can go to another sub-hierarchy of the context menu (like "Edit in..." => "Open in Photoshop") and get displayed a list of templates I have made known to LR. Think along the lines of "Edit in..." => Open as SmartObject into template" => "My 3 image collage template.tiff". Now LR does all it's trickery, opening up PS, creating a new file, loading the contents of the assigned template into this new file and finally putting all images as SmartObjects into the newly created image. (So far, when you open images as SmartObject, you open one file per SmartObject, kind of inconvenient). I now am able to slot the SmartObjects into the layer hierarchy where I want them placed and do additional stuff with them, just as I would with "Open as layers in PS".

This newly added behavior would have the benefit of me not having to painfully recreate the layout from scratch every time. What do you think? I sense a workflow improvement for a lot of people coming :)