I have noticed the Splash Screen being displayed two or three times during startup of Lr Classic 8.3 along with (not responding). My OS is Windows 10.

The problem seems to be easier to replicate when launching Lr in the Library showing the grid view.

In Preferences, the "Show splash screen during startup" option needs to be enabled.

Here are my steps to reproduce the problem:

Launch Lr Classic 8.3 and when the splash screen goes off, click on the interface - I've been clicking on a blank area of the menu bar.

After a few more seconds, the splash screen is displayed for the third time and Lr shows (not responding) again.

Waiting for a further short while, the splash screen goes off again and Lr resumes initialising itself.

Updates for the Adobe Photography Products were released on 10.20.2020 that include fixes for these issues. Please install the most recent update and confirm that your issue is now fixed. Please let us know if you encounter any issues.

Thank you for your patience.

Rick, I can confirm that this problem has been fixed in LrC 10.0.

Thanks, Anthony! I'm glad it's working for you.

I had been having a similar problem for several months and was hoping it would be corrected in version 10.0. In fact, before the October release I had re-installed Windows 10 (on a new NVMe SSD), hoping it might have been an issue with my 2 year old Windows 10 installation. Sometimes I would see the splash screen appear more than once, and other times it would appear once and then the program would open (in Library module) and then would hang before the higher resolution thumbnails would load.

When I installed Adobe apps again after updating Win 10 and then updated LrC to the October release, it worked as expected the first time it launched, but then I had the same problem on subsequent launches. Here is what I have found.

1) I don't have the problem if I close LrC while in the Develop module. I can then open LrC again and then switch to the Library module.

2) If I close LrC while in the Library module and then reopen, the grid of images comes up, but LrC never loads the higher resolution thumbnails. The blurry thumbnails remain, and the application hangs when I click on it.

3) I found a report online where someone said LrC would hang when opening in the grid view of the Library module. So I changed to the loupe view of a single image before closing. When I restarted LrC it seemed to open fine in loupe view of the same image; however, as soon as I switched to loupe view, it hung again.

Hi Anthony, Thanks for taking out time to report this issue. There is a bug logged for this. We would be looking into it. Regards, Sumeet

I have the very same issue starting with the 8.3 version of Lightroom Classic. Today LR was updated to ver. 8.4. on my PC and I see the splashscreen still showing multiple times. I'm just wondering how much time as easy issue as this one needs to be fixed.

I would think that two months to fix this problem is ample time. Bugs like this should have top priority and this one should have been fixed in Lr Classic 8.3.1. The development team must know what they changed to introduce this bug in 8.3 and it should be easy to fix. It should never have got past their testing before 8.3 was released. That's assuming testing is being done. There was some pre-release testing being done by selected users in the past, but that seems to be gone now. This is a shame because that testing would have picked this up before release. We seem to be paying for software that gets more and more bugs and less and less fixes.

I have the same issue with the latest version (v8.4) of Lightroom Classisc and it is not so much that the splashsceen appears multiple times, but that Lightroom becomes unresponsive  for a minute or so for no obvious reason.  It is very annoying .... If there is a known bug logged for this isue, could you please indicate when the bug is expected to be fixed?

If it annoys you then just turn the splash screen off in preferences.

Can you suggest how I might determine what Lightroom is doing in the background that causes it to become unresponsive?  I have only noticed this behaviour with the latest release.

The other odd thing I have noticed is that Lightroom only seems to become unresponsive and display the splashscreen multiple times if I was last in the Library module before shutting it down (Exit).

If I was last in the Develop module, Lightroom starts up with just one display of the splashscreen and doesn't go into an "unresponsive" mode for several minutes - weird ...

Lr will become unresponsive in any module during startup. It doesn't matter if the display splash screen is selected or not in preferences. If it is selected, it is just another indication of a problem. Launch Lr and when the splash screen goes off after its first display, click anywhere in the Lr window, the splash screen will be displayed again and Lr becomes unresponsive irrespective of the module you start in. What is annoying is how long Lr takes to be ready, a problem introduced in Lr 8.3 by Adobe developers and even more annoying is that it’s not fixed. If I ignored problems reported by my customers due to bugs I introduced into my code, I would soon have no customers.
Tony

I have no LogiOption plugin in my Lr Classic and still get a re-display of the splash screen with Lr going comatose with "unresponsive" if I click anywhere in the Lr window while it is taking an extraordinarily long time to initialise itself compared to pre Lr 8.3.

Tony, there may be another plugin that is causing Lightroom to be slow to start up.  To find the culprit in my case, I disabled all the plugins and then enabled them one at a time until the "unresponsive" problem occurred.  That is how I discovered that it was "LogiOption" - but yours maybe caused by a different plugin?

Thanks Dennis, I only have the standard Lr plugins: AdobeStock, Facebook, Flickr and Nikon Tether Plugin. I turned them all off just to check. The problem still persisted. Here is a screen shot after clicking a number of times once the first display of the splash screen had gone off. As you can see, Lr has gone off into lalaland, but it does eventually come back. 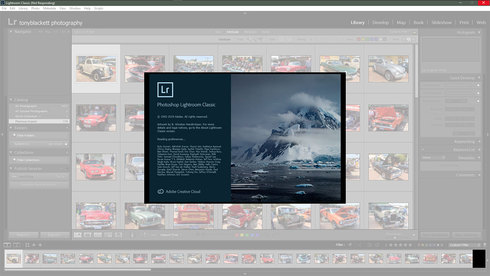 The plugins I have installed are OnOne and LRTimelapse. Several of the default LR plugins have been removed because I don't have any use for them. I have not tried disabling these two yet. This same issue pops up with NO clicking anywhere every time during startup.