I have a(gain) server issue: I'm trying to download sync pictures from the cloud to classic. Pictures were uploaded from my iPad (that's my workflow to keep the full res images on iPad) to the cloud and sync is complete; pictures are available on LR web.

Nothing moves in the "Lightroom sync" tab:

There is barely no traffic at all in the monitor:

I've already restarted LR Classic several times and all apps are up to date (latest version).
My account is not full (11Go/20Go).

Any clue before contacting tech support?

I'll let someone with more knowledge of such things answer your question, I out of curiosity, what is your purpose in keeping full size images on the iPad (i.e. in the Adobe CC)?  If it's for backup, I get it.  However, if it's for viewing on the iPad, you aren't gaining anything as the iPad probably has less resolution than your images to begin with so can't use the extra pixels and Adobe sizes the smart previews the CC ecosystem uses for images sync'd from Classic to match screen resolutions all on its own.  I'm not suggesting you change how you do this, but wondering if you are getting any benefit from it other than using lots more cloud storage (which you're paying for) than you need to.Dan

In the Lightroom Sync Tab of the Preferences Dialog, you should be able to scroll down and find out which file is stuck. Since you have only 18 images it should be easy to interrogate them all quickly. First let's make sure that the iPad synced successfully with the web. Clicking on each image in the Preferences dialog list should take you to Lightroom on the Web where you can verify that the image has successfully synced from your iPad to the web. If all 18 are available in Lightroom for Web and visible at full size, then we know the problem is in the desktop app.
Adobe Photography Products

Thanks for your reply. There was no image stuck; they were all at "downloading" like you can see on the screenshot.
They were also uploaded from the iPad as 1) indicated in the dialog on the upper right (except it's still trying to sync locally other pictures but fails to do it and 2) they were, like you said, available on the web.

I finally moved on with another task and let it sync overnight. It was fin the next day. I still find it "a pain" for somthing claiming to integrate a "pro" workflow, though :( If it were the only bug or design flaw, it would be fine, but it's yet another glitch.

Same issue today! Not syncing anything ! No images stuck, just nothing happening: 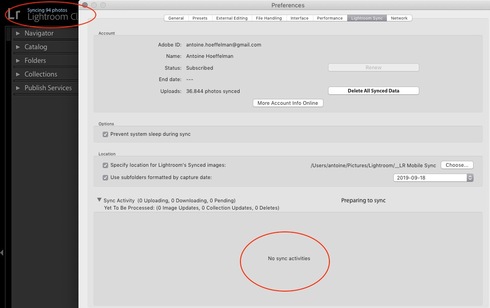 I am not sure if you are aware Antoine, but the Syncing dialog within preferences does not update instantly. It can take 30 seconds to refresh. Have you left the dialog open for several minutes to see if populates?
Adobe Photography Products

It was doing not doing anything for several hours: no processor activity nor network activity. I let it sync overnight and the next day: still nothing. I rebooted several times and it finally synced. I don’t exactly remember after how much time, but sync is, sadly, still pretty unreliable, imho

This morning, everything was syncing fine...

I can't imagine I'm paying that much every month for soo many bugs !! And yet this post is classified as "not an problem" ? How dare you treat customers like this!I spend a big part of the day with the helpdesk. Friendly Indians (Adobe, is that another way to cut the cost ???) but probably solving dozens of cases in parallel and who's only goal is to take control of my computer just to "Rebuild Sync Data".And as they're unable to use a WeTransfer link, here are the logs:https://adobe.ly/2nroPu6

Once you are sure that no originals are in the cloud which you have not backed up to your own system, I wouldn't waste any more time on this. Start Sync afresh by using the Delete All Data option.

That would probably be the quickes option, but I won't do it. Here is why:

- Because it's unacceptable to have a such unreliable sync process with vital data. With such a price tag, one could expect a working software. I want this bug to be reported and treated.
- I've spent enough time working around Adobe's limitation (not syncing smart collections, folders, ...) and organizing collection manually. It's not my job to fix their mess.
- I won't invest more time in trying to fix LR; I'm trying out various other DAMs and aside stability, their innovative character are more and more appealing to me.

I had 2 years+ when sync was working perfectly, and I do put a lot of stress on it. Apart from the volume of images and edits that I push through, I'm almost simultaneously changing metadata in Cloudy/Web/iOS/Classic. You might say I deliberately try to confuse it. Only this July did I finally succeed, or Adobe changed something that broke it for me. Who knows which? Eventually, I decided to make a fresh start with sync, and it's been rock solid since then.Yeah smart collections don't sync. Adobe fail to sync all key metadata like keywords and labels. That's OK, just like I'll grumble that there wasn't enough nduja on my pizza - but it will be a good lunch break anyway.Good luck finding one with the ambition and combination of powerful features that Lightroom offers (and with Photoshop).

I don't put much pressure on sync. And yet every couple of weeks / months, it fails for an unknown reason. I can live with it when everything is safely synced and when I'm close to my desktop, but NOT when I'm on the filed. That erratic behaviour makes it unreliable for my usage. That's why I want that problem to be solved.

Like previous issues, I don't have any error message or anything like that. This only is a sign there is much room for improvement. (I'm not saying it's easy, aand certainly not blaming devs, I'm saying it's not finished yet)Last time sync got stuck and a dev dove into it, they found it was because one of one image "had no capture time". Can you believe this? Rahul's (dev) answer was :

Yes, it should sync irrespective of the capture time. Fix will be there in the future release.

So it DOES help to report bugs.

Good luck finding one with the ambition and combination of powerful features that Lightroom offers (and with Photoshop).

My reply brings us off topic, but here it is : Competition is moving very fast and providing very creative tools. Just have a look at On1 2020. LR doesn't seem creative to me anymore, certainly not with classic. The last big update brough superresolution. It's a nice feature and kudos to the dev team; but I don't feel they're innovationg much anymore.

And even with mobile, I don't feel they're listening to feedback. The last big update brought the tutorials, which I really don't care about. But no improvement to the many requests and bug reports on this forum.

The "cloudy" version is, in my opinion, still miles away from what classic provides, and is aming casual -smartphone- photographers (some call them "modern"). The direction it's taking doesn't appeal to me and I assume Adobe will ditch calssic once cloudy will be strong enough. Maybe they already have and just maintain acceptable updates to classic not to frighten classic's loyal users.

The only thing I'd be missing would be sync features. I really liked the ideay of being able to import on the go and finding it on desktop afterwards. But with all the limitations (stacks, keywords, edit history, ...) and the fact it's so unriliable to me won't be a big loss for me. I'll just use any other cloud service and edit on my computer; I'm fine with it. And I bet competition will come with a similar tool, which is great for everyone.

So why am I still here? Honestly just because my subscription is still running for a couple of months and because I'm lazy. But that's all, really. And also maybe a little bit of hope :)