In Lightroom 4 or 5 it was no problem at all to start up to three or four background exports - of course the UI, especially the development module, was considerably slower than normal, but definitely completely usable.

Edit: It makes no difference whether GPU usage is turned on or off.

These days, each export is running parallel exports (currently 3 I think) behind the scenes - so you starting 3, it's like you're running 9 exports at once.

Ok, this makes sense: Even with only one export running, LR 6 now already uses nearly 100% of the CPU - I didn't notice that at first. So it really makes no sense to start multiple parallel exports anymore.

Just to jump in here I have a PC that is pretty much top spec 8 Core I7 5960x with 32 GB Ram using Samsung 2000 MB/s M2 SSD and 980GTX Graphics card and Lightroom CC runs so slow, not even building 1:1 previews help. So I can confirm its not a hardware problem, its a software problem for sure.

Going back to lightroom 5.7

I am tempted to do the same

Interestingly I have a 2012 i5 with 4.5 GHz, so quite powerful still, 32 GB of RAM, 1 TB SSD for catalog etc. Windows 7. And I have a Core M tablet with 128 GB SSD and 4 GB of RAM, Windows 10. The desktop, while usually faster, is barely usable while exporting. Even with one export task it gets sluggish. And not only in the export module. In the library too. The tablet however does fine... I mean it does slow down, but nowhere near to the sluggishness of the desktop.

I think 3 things would be great to see:
Export tasks get split out to a different process, so that we can set the priority to idle. Or Adobe itself prioritizes it as idle by default. That way we can continue to work while exporting. Same thing with imports, rendering previews, ... all tasks that can chuck along in the background. It really makes no sense having to wait with export until we leave the PC.

The ability to pause exports. You can pause other things already.

The ability to queue exports, perhaps with a checkbox. Adobe has that kind of functionality in the Media Encoder. The reason why I start several exports in parallel is because I need to export a few thousand files in one folder, a few thousand in another, ... and so that the computer doesn't run out of work I'll start them at once. They don't have to be processed at once though, which is inefficient anyway.

Got lightroom preferences - performance and uncheck "use graphics Processor"

No, it has nothing to do with the GPU.

See: "Edit: It makes no difference whether GPU usage is turned on or off".

And: Victoria Bampton answer "each export is running parallel exports". That causes the lags when one unnecessarily starts multiple parallel exports. Which is not a real problem.

By the way: The export is not (yet) accelerated by the GPU.

I have the same problem. Almost 100% CPU used by lightroom CC. Lightroom 5 was very fast but CC is sloooow even I move cache folder to faster disk.

I have to say this is really buggy and slow. NEW computer, NVidia 980 gtx and 32 gigs of ram. LR5 worked without a flinch and 6 gets stuck. Like I said....all new win8.1 system but runs LR5 like lightning. Glad I did not delete LR5. I'll put 6 to bed for a while.

I see I'm not the only one experiencing the sluggishness of LR6. I stuck with LR3 for quite a while with no problems, then moved to CC with LR5, I really didn't notice any issues with LR5 until recently. I read that LR6 made some improvements in speed so I downloaded it, but it was painful trying to process my images. When I spot out things, there is a slight delay that is frustrating. I'm on a Mid-2011 iMac with 2.7 ghz and i5 quad core processor, and 16 gb of ram. I have done everything I can (clean up disk space etc) except add more RAM to try to improve it so not sure what I'm going to do next.

If I had a machine that was even close to being underpowered I could wonder but basically just out of the box with a 980. i7 and 32 gigs RAM. Nope...there is a problem but I'm sure they will put a fix on it fast....it has to be in the spotlight.

The strange thing is that it will run ok for just a little while and then start to slow down and like you said...spotting and the brushes slow down and lag.

I really feel sorry for the people that work at 90 miles an hour an pump things out all day.

I would not upgrade if I had 5 (CC) running and glad I did not delete it as it runs perfect. I use 5CC and uninstalled 6.

Been wondering two things....is there something that is running in the background like FRec or is it not cleaning up something as it makes changes.

Well if your having issues with it using an i7 processor and 32 gigs then there is really an issue! I still have 5 installed as well. I have one set of images I processed in 6, so for those images I think I'm stuck unless there is a way to get them into the 5 catalog with my adjustments(?)

I have less of an issue on a Core M with 2 cores, 2 GHz max and 4 GB RAM than on an i5 with 4 cores, 32 GB and 4.5 GHz. I think it has something to do with the graphics card of the Core M being better (deactivated GPU acceleration on the i5). Or perhaps with Windows 10 being better.

Ya... I'm running dual i7s with 32 gig RAM and LR6 is waaaaaaay slower than 5.7 and uses a monster amount of CPU. Something is obviously wrong here.

just installed lr6. Tried doing 4 HDRs in background at once - D800E @16bit x 3 images - what an idiot! After half an hour got to 60% decided to abandonn - took nearly half an hour to get out, stop PS from inner explosion and restart computer. Yes nice idea, don't think I'll be using it and boy is the program SLOW!

Ive spent the last 2 days thinking i was the only one with this problem... it needs to be fixed asap... edits are taking twice as long...

Launching, importing, and exporting are DRASTICALLY slowed down. I did a direct comparison between the two. Here are some times to make your hairs go grey.
*All times in seconds.
**GPU acceleration unchecked in CC.
***Face detection paused in CC.
****Mobile sync paused in both 5.7 and CC.
*****Catalogue already has over 100,000 images.

Have to agree. I'm a photographer, working on thousands of images per week, and all those extra seconds are really getting me down. My workflow has substantially worsened since installing the latest LR CC.
I've tried the various parameters - GPU checked, unchecked. Increasing and lowering cache amount. Lowering the preview size to 1024px (I tried Auto too - no good).

I always build standard and 1:1 previews for all my images so I can fly through them on initial selection (rating) stage, and this is taking so much longer it is becoming unusable.
Sending files to export now takes up to 30seconds just to get the task bar up, whereas before it took a couple of seconds.
Moving from folder to folder is sluggish and LR takes ages to rebuild the folder structure with number of photos in each folder, whereas before this was very quick.

My iMac may be 5 or 6 years old, but a LR update shouldn't render it obsolete.

I've still got version 5 on here, but would rather that the new one was fixed - is this going to happen?

I am having the same problem. The develop module is unusable as changing anything takes time to respond. Because I had space problems I uninstalled 5.6. 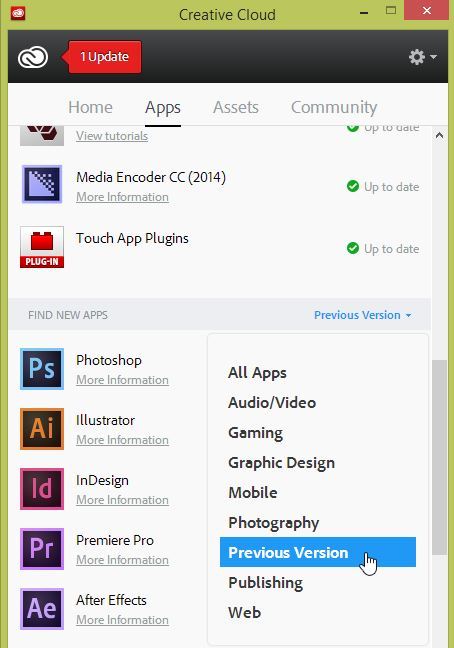 Philip - I was able to talk to a real person at Adobe yesterday, and they said they're aware of the problem and are working on an update. He suggested sticking with 5.7 until then.

Tom - if you've uninstalled 5.6 you can install 5.7 by choosing Previous Versions in the Find New Apps section. Maybe uninstall CC and go for 5.7?

so im sorta confused... i get how to downgrade from lr6 to lr5, but what do i need to do to my catalog to ensure the edits i made in lr6 stay with me in 5.7?

The way it works is that the changes to the catalogue you've made, like adding photos, generating previews, virtual copies, and creating collections can't be ported over to LR5.7. Which sucks. But the edits to your photos, like ratings, metadata changes* and develop edits are baked into the photos (* as long as you've either selected automatically write metadata changes to files in the Preferences, or at least selected all the files and clicked command or control + S). Those changes were all still there for me when I switched back to LR 5.

Do you still have your LR 5 catalogues?

How do I uninstall the latest version and get the last version, but with all the changes I have done to hundreds of files since then.
And how do I justify paying for the latest LR updates via CC, if I cannot use them?

Hey Phil,
the changes to the photos should still be there. The changes are made to the files...

Do you have automatically write changes to XMP files selected in the Catalog Settings? If not, you can select all the images and press Command or Control S to save the metadata changes. Otherwise, everything from an editing perspective is baked into the files, not the LR catalogue.

The new CC catalogue won't be compatible with any older versions. Do you still have your old catalogues backed up? If so, after you load up your last catalogue, you can synchronize your folders to add any new images - and your edits, including ratings - will be added.

As for forking over all our money to Adobe... you got me there. 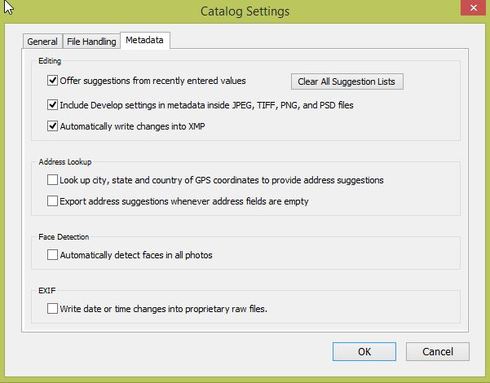 Wow...I hope Adobe gets a fix soon. This is killing my productivity as a Pro trying to process thousands of images per week. I can't believe this version make it to prime time.