Adobe CC Offline Installer - what is so difficult?

has the one guy who is able to code an offline installer left adobe?

or why is it suddenly so difficult for adobe to provide offline installer?

and the one installer they do provide (for PS) does not let us choose the language.

how stupid is that?

weeks ago prodesign tools wrote this:

We were just contacted by an Adobe Product Manager who says the company is aware of the situation and hoping to find a solution to restore direct download links and standalone installers for all tools in the new release! So we’re happy to report they are listening to customers and hearing your feedback. Please stay tuned to this page where we will keep you updated in the coming days!

that was on june 22.
over a month later.. nothing!

do people who work for adobe are really unable to understand why some customers want/need/prefer offline installers? (*)

why do i have the impression that each time adobe releases a new verison they were busy searching for ways to annoy us customers?

instead of providing a good user experience they seem to work hard to make it a mess for us.

features that nobody wants (like the stupid LR import dialog), features that are implemented while not working correctly (after effects preview cache) to just badly coded GPU support.

and then adobe employees who tell us "we listen" but NOTHING CHANGES.....!!!!

here are just a few reasons:

You can find offline installers here:

Note: You still need to be online to sign-in and activate your software.

Install location and language need to be set in the Creative Cloud application preferences prior to running the update: 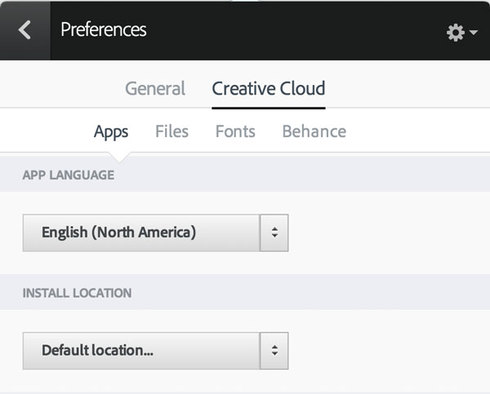 and thanks for marking my question as answered when it is OBVIOUSY NOT ANSWERED...

there is no CC app on my test system.

when you use the offline installer all you have is a set-up.exe.

and as my test system has no internet connection (as mentioned), even if i had the CC app prior to installing PS.....i could not use it ... because i have to be online to use it. ;)

you see the paradox thing is, adobe creates an offline installer but to be able to choose the language you have to be online.
why someone thought removing the dropbox where you choose the installation language is beyond my understanding.

i know (as i am a subscription member) that i need an online  connection for activating adobe apps. but that is not the question here.

all i want to do is installing a new photoshop version for for some quick tests.
and i want to be able to choose the installation language.

The CC app has an offline installer. It manages the licensing so you need it anyway.

no i don ́t need it for a TRIAL.

i installed photoshop with the offline installer and i can use it.
i get that trial nag screen each time i start PS but i don ́t need to log in with my adobe ID.

jeffrey next time it would be nice when you read my post before answering.

as you can see i have downloaded the PS offline installer already. hell i wrote about it above!!

and the one installer they do provide (for PS) does not let us choose the language.


there are how many adobe apps who have no offline installer?

as to the language nonsense, i wrote my opinions here too, but my thread seems to be deleted.

i guess it ́s easier to delete such things then to act on user critizism.

but i still have it:

so i downloaded the offline installer for photoshop 2015.5 because i thought this weekend i have time to try the new version.

i installed the trial in a VM with no internet connection.
im not going to update my photoshop i work with to 2015.5 yet.

normaly i get to choose the language i want to install but not this time. of course not. adobe found a new way to pi$$ off it ́s customers.

why is that not possible anymore?

is there a trick to tell the installer to install english?

and i don ́t mean renaming the *.dat file.

i mean an official trick like a commandline switch?

such things make me really angry.
only a little bit of thought put into this and such things would not happen.

it is a 1.3 GB multilanguage installer so why not giving the user a choice...damn is it so complicated?

is there a committee at adobe that has no other job then to pi$$ off customers and make things worse?

maybe some people like to use photoshop in englisch (because they learned it in english) but their spouse who works with indesign likes to use indesign in french.

why is adobe making it so complicated?

The CC app is the application manager and its preferences control install language and location.

but what is the reason to provide an OFFLINE installer and then make the language selection a matter of being able to connect online?

why is there no dropdown box anymore that let people choose the language they want to install?

and what about when people want apps in different languages?

what if my OS is german but i want photoshop in english and my spouse another adobe app in french?

is that even possible with the application manager?

you people at adobe should talk about this and make things easier for your customers.

right now with the lack of offline installers and the removed choice to choose a language you do the opposit.

to be able to get to the prefs i have to login with my adobe ID not?

when i start my cc desktop app i can ́t do anything as long as i am not logged in.

Correct, you need to be online to activate - this has been the case from the very beginning of CC. Once you sign in all your apps are activated including the CC app.

I DONT WANT TO ACTIVATE

i simply want to test photoshop 2015.5 for 7 days (or whatever the period now is) on a system that has NO ONLINE CONNECTION.

that ́s why i downloaded the OFFLINE installer.

i can test photoshop on that system...it works.
i don ́t have to login with an adobe id .

i start photoshop then i get the trial nag screen.

BUT... i don ́t get a choice to choose the language.
photoshop chooses the language of my operating system.
but that is not the language i am used to when working with photoshop.

I'll let the CC app/install team know what you're trying to achieve.

they only have to bring the dropdown box back into the offline installers.

so users can choose the language when installing an application.

and i don ́t know why it was changed.

doing it AFTER the software is installed is just cumbersome (and when installing on a offline system impossible).

many germans, french, italians etc.  want to use photoshop in english, because most tutorials are in english.

that photoshop just assumes that users want their native language is wrong.