Firstly let me say that I love the Libraries feature. For years I've used it for just a few core assets, but when I recently switched to using it for just about everything, it was one of the best improvements to my workflow in years.

But there's plenty that could make it even better. Here are some suggestions (other users please feel free to add your own)

1) offer larger Styles thumbs
Each Style takes up about 68x45px in the Libraries panel, yet much is wasted space; the style itself is a tiny 23x23px. Merely optimising the spacing inside the 68x45 container would make a big difference. Offering a larger (and square) version would help further. Notice how the styles below each have individual character, yet their differences can barely be discerned in the current small thumbs. 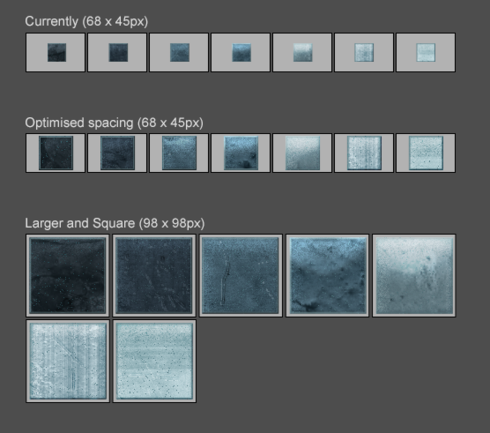 2) incorporate presets into it somehow.

To make matters worse, the current system of hauling these presets from one computer to another is super confusing. For example, the "import/export presets" feature works only with preset files that the user has saved manually - it doesn't work with presets that the user has created on-the-fly during the normal course of usage.

And God help anyone who tries to make sense of the preset files themselves, as she'll find versions of them confusingly spread out over at least three locations:

Compared to the effortless ease of the CC libraries, this system feels pretty outdated

3) let colors be selectable while in color picker
﻿If you open up a color picker and move the cursor around the document,the cursor becomes an eye dropper with which you can grab various colors. Unfortunately though, it doesn't let you grab from the color swatches you have in the Libraries panel.

6) allow perma-linking to more than just graphics﻿
One of the great things about the library is that when you modify a graphic, it will automatically update across all documents that use that graphic. It would be great if other items in the library (eg. layer styles, character styles) worked the same way: edit it once, and have it automatically update across all documents. Perhaps this could be an opt-in feature that the user toggles for each item as needed?

Everything you wrote is more than reasonable, and the most is posting it at Monday morning : - ) while staff is waking up to work. I posted some bugs on Friday evening and they got lost under plenty of new posts :) Your ideas got my VOTE!

please add hotkey support for functions within the Libraries panel (eg. the "add content" button). The Libraries Panel is currently one of the only panels which doesn't support them.

Add more support for Libraries in Actions. For example, I don't believe it's currently possible to record the importing of a Library asset into your document as a part of an action