Batch Rename in Adobe Bridge CC seems buggy.
With an old version of Adobe Bridge (that came with PSE6) I used to batch rename my RAW camera files (Nikon *.NEF) using following naming convention:
YYYYMMDD-hhmmss-Milliseconds__ (based on Date Created).
In Adobe Bridge CC (that came with my newly purchased license of Photoshop CC) the Milliseconds part is ignored. Instead of the file name I want:
20140615-213725-310__JoeSatriani_TivoliVredenburg_Utrecht.nef
Adobe Bridge CC generates the file name:
20140615-213725-300__JoeSatriani_TivoliVredenburg_Utrecht.nef
Resetting all Bridge CC options (restart Bridge while pressing [Alt]+[Cmd] on my MacBook Pro and accepting the reset of all options) and starting a batch rename (with having to enter all options again) helps to get this to work again, but it only works the first time around.
A next attempt to batch rename using Adobe Bridge CC results (again) in ignoring the milliseconds. Resetting Bridge CC again resolves this problem, burt only for the next, first time the Batch Rename option is used... 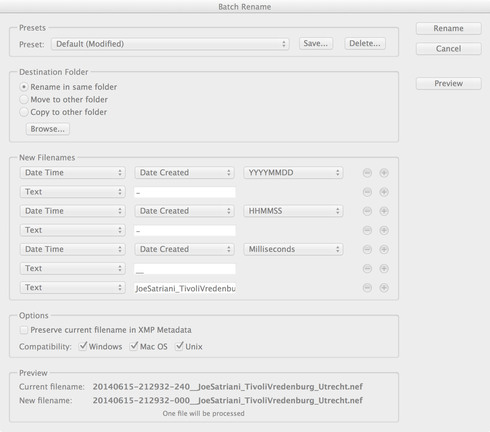 Replying to my own post...I found out that Lightroom actually 'knows' the millisecond part of the capture date/time. It shows in the Date Created field in the Library module (see the screenshot below, the field Date Created contains the value "2017-03-31T20:02:15.46", which includes the ".46" millisecond part I'm referring to ). 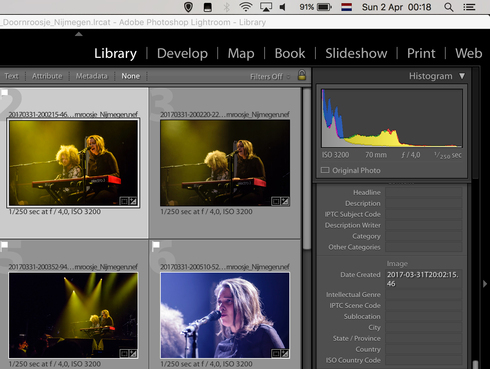 Because of the type of photography I do, I shoot in (small) bursts regularly. I guess at least sport shooters do the same.

When culling my images and only being able to use sequence numbers for photos taken within the same second, when I delete photo within the burst the sequence is broken. To fix 'missing' gaps in the sequence I would have to rename the photo(s) again.

Adobe Bridge is able to rename photos and use the millisecond' part to uniquely identify/name the photo.

I just wish that Lightroom would be able to do the same, so I can do all my basic editing and organising in Lightroom only.

Having this functionality in LR would be a real treat!

Sorry, thought I was posting in one of Adobe's Lightroom forums when I wrote this.Have also posted a likewise feature request there. Please support my request and maybe Adobe will include it in a next release...