This really annoys me! Photoshop (v21) and Lightroom won't open the Raw files from my old D300. I get a message that Photoshop doesn't recognize the file format. WTF?! (excuse my language) I can see a preview in Finder.

This problem seems to be known. Is there a fix? Will there be a fix any time soon?

ME TOO! I have five thousand NEF files mostly created with D-810 and some with D-300S Nikons that will not open. I have been in a dialogue with two different companies that purport to have software to fix this, but so far no luck. I also researched with Adobe and Nikon, downloaded the Nikon Codec latest version. I get the same error message on any NEF files now, using CC 2020 21.1.1. I get in Bridge, just the NEF logo and the file names but do not get a thumbnail, and Photoshop returns an error that the file is not a valid Photoshop file.

Annoying doesn't even start to describe this. I need those files. I can't believe Adobe has not been able to fix this. I mean there must be loads of people who have the same problems. And if it even effects full frame Nikon DSLRs then it's a serious issue.

I no longer shoot RAW so I don't know whether files from my D-850 would also be affected.

This is my signature.  There are many like it, but this one is mine.

@Ash_Mills_Photography:   I am believing now that some sort of corruption happened to those files on my system and that this is the reason for the problem. I can't nail down just what or when. Some of the NEF files open just as they are supposed to, but a group that were photographs from Alaska in 2015 seem to be most affected; not all, but most.

I have a copy of those files on another PC, which has CS6 on it. The phenomenon happens on that machine as well. Ergo, I must have had corruption occur prior to copying the files over.

If I still had that camera and CF card, I could dig deeper, but I do not. (The person who bought it from me when I got the D_850 has not had any problems, so I think that the culprit must have been some event or software that I installed.) ((Stated differently, " The culprit must be me"))

@ash_mills_Photography: After a lot of digging and head scratching, I have finally gotten to the bottom of this problem, and, I inflicted it upon myself! Two years ago, I replaced my data drive with a new WD 3TB drive. I also replaced the boot drive with an SSD.  My error was thinking I could ignore the roughly 2.14 TB drive size limit that exists with Windows 7; I used Acronis Disk Doctor to install the thing.  Now what has happened is that I have been spending a lot of time editing files during the Corona virus stay-at-home time, and with multiple layers, I filled that boxcar over the top. Considerable corruption ensued, as every reboot caused an automatic CHKDSK to run unless I was quick enough to intercept it with a keystroke.

So I have spent this week deleting images that should have been culled, got the E:/ drive down to 1.7 TB, have decided to get on with switching to Windows 10 so That I can use a bigger drive and the new features of Photoshop, since the latest will not install on Windows 7.

Anyone else reading this that might wonder, there is a command line sequence to see whether there are drive problems. I made a text file, saved it with extension .BAT to the desktop, so I could run it as Administrator. Contents are four lines:

The D300 has been supported in Photoshop for many years.

How are you getting your photos from camera to computer? Older Nikon software is known to render images unreadable to Adobe software. Have you tried eliminating Nikon software from your workflow when importing your images to your computer?

@john_waller_6079410 I'm not using Nikon software. I have the files downloaded to my Laptop or Synology. I've never had an issue opening and editing Nikon RAW files, even the D300 ones. I can open the ones from my D500 just fine. It's just the older ones that won't open.
According to the list of cameras supported by Camera Raw, the Nikon D300 should work just fine. I don't understand why they should stop working all of a sudden. It's not like people get rid of their older RAW files or never need them again.

Yes, I used to be able to open NEF files with earlier versions of Photoshop, and have used Nikon D-80, D-200, D-300S. D-810, D-850 being the latest one.  Something has changed. I still have CS6 on another PC but have tried to open these files on it, with the same results. I think it is a Camera Raw update that might be the cause.

To answer your other question: I always just use Windows Explorer and a card reader to transfer files from cameras. I do not use Nikon software to do so.

Is there a workaround? I have quite a few photos that I need to access and can't. Will going back to an older Camera Raw version do the trick? I'm just afraid that an older version won't be compatible with the newest PS version.

Not sure we can even get an earlier version. However, on a laptop that still has CS-6 running, I am getting the same failure.

I'm having no issues opening up Nikon D300 NEFs shot in 2007 downloaded at the below link. I'm using ACR 12.4 and LrC 9.4 on Windows 10. Can you upload one of the files to Dropbox or other file sharing site. I'll take a look at it.

Thanks, Todd: Here is a DropBox Transfer link  https://www.dropbox.com/t/EEiw2m2y8Vebleaa

with five different NEF files. These were shot using the D-810 back in 2015

The metadata in these files has been stripped or relocated perhaps because they were opened and edited in Nikon Capture or other raw editor.

This is all that's showing in ExifTool....practically nothing! They also aren't recognized as raw files using the Adobe DNG Converter so they can't be recovered that way.

Try opening them in Nikon Capture or other Nikon raw converter. 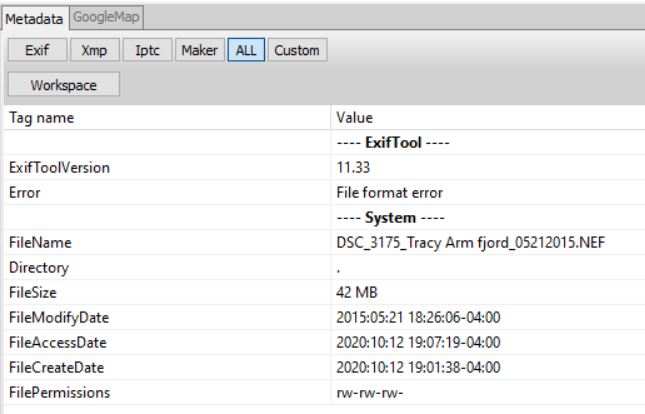 Google search....I am sure there are others.

No issues here with opening D300 Raw files in v21 so, as Todd says, best if you upload one of your problem files for us to investigate further. 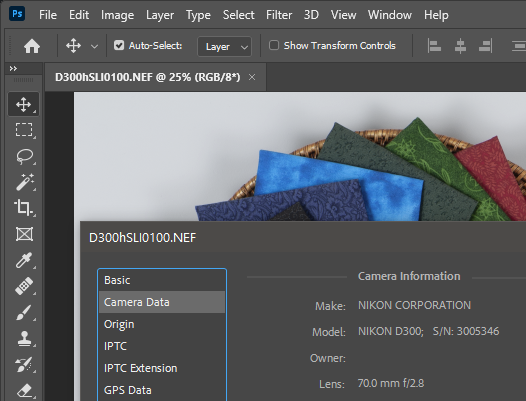 John, see my post above concerning the five NEF files DGrainger uploaded to Dropbox and a way to fix them.

@john_waller_6079410  Hi i have a problem with my Nikon D7100 NEF files since I have downloaded latest Camera Raw, but my MacBook Pro is older version and can not update Photoshop! Everything was fine until I have updated Camera Raw!!! Since then I am getting a message that Photoshop is not recognizing NEF file which has never happened to me before?!?!?!

@Todd_Shaner: An update on my particular situation...

I used the tool for which you gave us the link, fix_corrupted_NEF.exe but got errors and no repaired files. 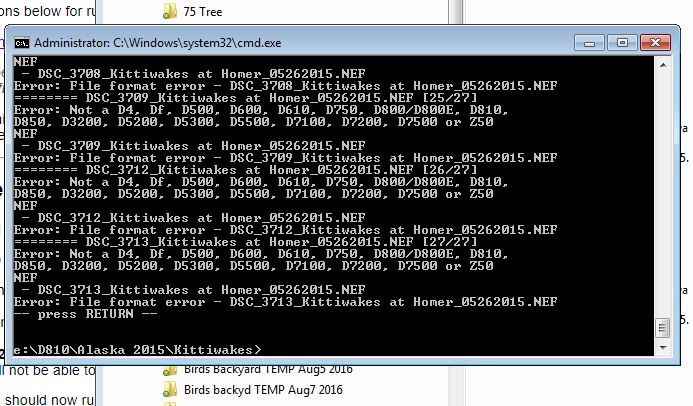 When I ran the fix_nef utility, there were two choices, either 12 bit or 14 bit.  Later, I explored a number of NEF files from around the several months before the examples I had sent were taken, and discovered to my surprise, that I can open them! I also note that they, taken with my Nikon D-810, which I no longer have, when opened, are NEF 8 bit files. I wonder whether a setting in my camera at that time altered the expected bit depth for a time, and whether that might have something to do with the unrecoverability for that particular group of files, images shot in Alaska in 2015, samples of which were uploaded for your view.
Thanks for all your help! At this point I think that I will just  "write off" the affected images, and plow through the rest to find what DOES open. 'Tis a mystery.

I also note that they, taken with my Nikon D-810, which I no longer have, when opened, are NEF 8 bit files.

D810 NEFs are either 14 bit lossless or 12 bit compressed files. How are you determining they are 8 bit? They may be JPEGs that somehow got the file extension changed to NEF. Try changing it to JPG and see if they open.

Did you try both 12 bit and 14 bit with the fix_corrupted_nef application?

I opened a few NEF files and might have misinterpreted what I was seeing at bottom of Camera Raw page: it said Adobe RGB  (1998) - 8 bit.

Yes, I did try both 12 bit and 14 bit with the fix_corrupted_nef application, with same result each time.

I will try changing the extension as you suggest!

I changed name to end with JPG and the file opened!!!!

Somehow I must have done a mass name change years ago or perhaps an error in importing files from camera!    THANKS!

How do I mark this a  SOLUTION?

Ooops! It worked on a few files, but then stopped working on others.

On the 8 bit files that didn't work with .JPG try .PNG and .TIF, which can also be 8 bits.

changed to tiff and didn't work, changed to PNG and it shows a thumbnail that is not related and will not open in Photoshop.

Weird! Maybe these were edited in PS? Try .PSD

Well, I tried .PSD and got the same "... not a valid Photoshop file" message

I'm out of ideas. Perhaps someone else landing here can help.