There is a bug in Photoshop CC whereby the camera metadata ends up in the wrong fields. I noticed this because the copyright information was wrong on some of the files, and I saw this upon investigation.... 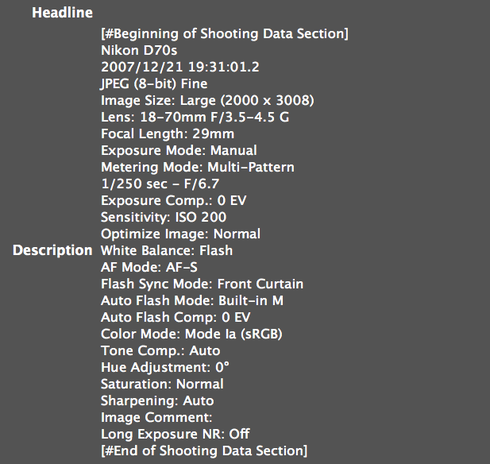 In my case, 55 files out of 128 ended up with the shooting data in the IPTC Core "Headline" and "Description" fields.

How are you viewing the metadata?
Have you verified the metadata in Photoshop's File Info dialog?

I viewed it using Bridge.

Please verify the data in Photoshop's File Info dialog. This may be just a Bridge display issue.

Too late. I re-wrote the metadata after verifying that it was incorrect.

I converted about 6,000 files from PSD to TIF as part of a batch command from Bridge -> PS CC. For a group of files (mentioned above), the mis-write was 50%. All other files were fine. The meta data was fine prior to the conversion.

Seems to me that the odds favour an issue in the file, since it was only these files that exhibited the problem. Now whether the file issue was caused by PS CC during the save, or, not handled properly by Bridge is unknown to me, and better left to you to figure out. Either way, it is an Adobe bug, me thinks.

Without the files to verify what was written in them - we have no idea where the problem might be.

As far as I can tell from the Photoshop code - what you show should be impossible. But the Bridge display code might have some issues.

I can see that an issue with Bridge would result in this error. I've noticed that Bridge has a few annoying issues with the CC version that don't seem to be there in the CS6 version.

1) Switchboard is almost *always* unresponsive (when I check through Activity Monitor). Maybe related to an issue where CS reports that it is not ready to run a batch command from Bridge.

2) I can be looking at a file in Bridge, and suddenly, Bridge jumps to a folder other than the one I was in. This one is really annoying.

Of course these may or may not be related. With code, you never know....

If this happens again, I will make copies of the files and send them in. I should have thought of that, but forgot in my panic to fix the metadata.

Check for similar topics on Bridge, and create new ones if you need to. We want to improve Bridge, but need customers to log the reports so we can tell management to prioritize those issues appropriately.

Yes, example files would help a lot -- then I can examine the raw metadata and look for problems without involving any of the applications.

Maybe related? I have a PS file that Bridge will not let me change the metadata in. I saved it as a TIFF and no problem with the newly saved TIFF file. I flattened the PSD and saved it again, but no luck again in Bridge when trying to write a metadata template to it. And when I try to edit a field myself, I get a message from Bridge saying that the field cannot be changed. Also, I cannot "open" file information on this PSD.

Here are 4 files that I have metadata issues with. They are currently uploading to my Dropbox, so give it at least 4 hours from the time of this post...

Any luck analyzing the files?

The Peppers files all look fine in Photoshop and Bridge CC, and when inspecting them in a hex editor.

The Ireland photos also look fine in Photoshop and the hex editor.
In Bridge you have to change the upper limit on the size of files to process and purge the cache - then the Ireland photos metadata looks just fine.

I wasn't able to reproduce the error pictured above at all.

Which OS version are you using?

Do you have any third party or custom additions to Bridge for viewing metadata?

I purged my cache just the other day, so I will take a second look at these. I am using the latest OS X and I am not using any additions to Bridge.